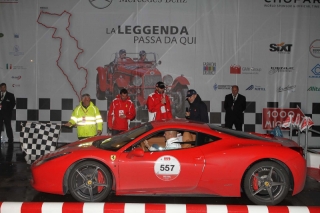 Brescia, 18 May – The 1000 Miglia ends where it started: in Brescia. On their way the cars had to conclude some important stages, such as the one passing Florence, where stunned tourists welcomed the Ferraris on Piazza della Signoria.Tourists from all over the world shot photos of the cars from Maranello, forgetting about the sights and the museums. After Florence the cars from the Prancing Horse were on their way to the most important section of the tour, including the Futa and the Raticosa pass: the F40s, F599 GTB Fioranos, 458 Italias and all the others thrilled the spectators on the side of the road. Thanks to the enthusiastic welcome – similar to the one usually reserved for the Giro d’Italia bicycle race – the participants gave it their all. But the race went on without another break, followed by one of the most significant moments, when the cars passed the Ferrari Works in the heart of Maranello. One car after the other passed the super-modern works to reach the Fiorano circuit, where they went for several laps, delivering a marvellous sight. The supercars from the Prancing Horse from past and present on the track, where the new Ferrari models and the F1 single-seaters driven by Alonso and Massa usually take their first steps, was a unique experience.But Ferrari is not only emotion, passion and tradition, but also solidarity, which was shown when 1,8 million Euros were collected for the families hit by the earthquake last year in Emilia-Romagna. Main part of the money – exactly 1,4 Million – came from the auction of a splendid 599 XX Evo, bought by the generous Californian Benjamin Sloss. Maybe because of this and because of the passion of the inhabitants of Mirandola, the passing of the Ferraris here in the town, where the results of the earthquake can still be seen, is especially exciting. Adults, teens and children welcomed the cars from Maranello in their own special way. A ceremony concluded the stop in Mirandola, where a flag with the Prancing Horse was placed in front of the still damaged church. In the end the Ferrari Tribute to 1000 Miglia arrived in Brescia in the late evening, where the spectators were already waiting for the grand final: a team from Brescia, with Giovanni Luca and Alessandro Mingotti Giovanni, on board of a Ferrari 458 Italia, was the first to arrived passing in front of the enthusiastic crowd and their relatives. 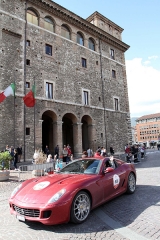 Rome, 18 May – The last stage of the Ferrari Tribute to 1000 Miglia started at 5am. Over 700 km from Rome to Brescia with the most exciting sections of the whole race: the Futa and the Raticosa pass, where the drivers in the original race gained the advantage to win the Mille Miglia. After the start the cars went to the Vallelunga race track outside Rome. The track is named after Piero Taruffi, who won the last original Mille Miglia with a Ferrari 315 S. The Ferrari Tribute to 1000 Miglia then left in direction Tuscany, passing wonderful villages such as San Casciano Val di Pesa as well as legendary cities like Siena and Florence, where the cars passed the city centre and drove along the river Arno. Due to the weekend there are more and more spectators, who warmheartedly welcome the passing Ferraris. In the early afternoon the cars will drive towards Maranello and Mirandola, the village severely hit by an earthquake last year in the Emilia region. Then the march goes on towards the finishing line in Brescia. 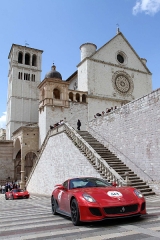 Rome, May 17 – After the cars had passed the Apennine, where they also had some time trials to complete, the teams arrived at San Sepolcro at 12:25pm, officially arriving in Tuscany. For the occasion medieval costumes have been dusted and when the Ferraris entered the town they made a proper time journey. The sound of the tambourines was drowned by the numerous V8s and V12s as well as the incomparable V6. The cars from Maranello passed through the town, where numerous spectators took their souvenir photos. Later on the cars arrived in Umbria, in Assisi, San Francesco’s city, with the monumental monastery. The spectators, mainly young people, followed the cars from the Prancing Horse through the streets, while they were looking for the best background for the photo shoot. Many waited to see the cars passing, thrilled by the number of cars from Maranello together at the same time. In the end the 74 cars from the Ferrari Tribute to 1000 Miglia. arrived in the eternal city at 8pm where At the Castel Sant’Angelo a podium had been set up for the passing cars, welcomed by numerous spectators in front of the castle. Cars like the 599 GTB Fiorano, the F40 and the Testarossa triggered the enthusiasm for cars and engines one can find in Rome, accentuated by some lightning in the distance. The Ferrari catwalk led to St. Peter’s, centre of Christianity’s, on a way charged with history and significance.

Ferrari Tribute to 1000Miglia: Friday, 17 May, start in Ravenna 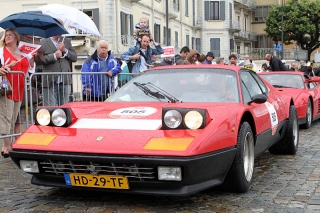 Ravenna, 17 May – A F430’s V8 wakes us up with a vigorous sound. Quite normal, because some of the teams stayed in the same hotel with us. The sun is out already and the Ferraris can be found on the square dedicated to the starting ceremony. Today’s roads will lead to Tome. Finally the Spiders can take their hoods off, enjoying the blue sky. A flag with the Prancing Horse flutters in the wind and exactly at 9:15am we’ll be in Gambettola, where the spectators greet the Ferraris with great applause, while an announcer expresses the residents’ satisfaction of the Ferrari Tribute to 1000Miglia passing through the town. The sound of a F40 resonates in the countryside of Emilia-Romagna: we’re passing Gatteo in the direction of San Marino. Unfortunately the rain is back, exactly when the cars pass in front of the beautiful castle, but one participants decides to ignore the weather and leaves the hood of his Scuderia Spider 16M down. Continue following us: Rome is getting closer!

Ferrari Tribute to 1000 Miglia: wet start of the 4th edition 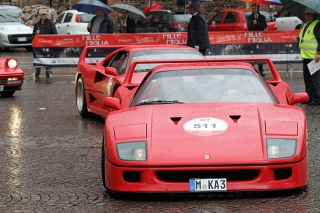 60 years after Giannino Marzotto’s victory at the 1000 Miglia in 1953, Ferrari is back at the famous event with 74 teams taking part in the Ferrari Tribute to 1000 Miglia. Historical cars like the 330 GT 2+2 and modern GTs like the powerful F12 are driving through Italy on a trip where tradition meets innovation.
On the first stage the cars show up for the technical checks, followed by a defilee through Brescia’s centre. Despite the rain the cars from Maranello, posing for a photo on Piazza della Loggia and later on Corso Giuseppe Garibaldi, invaded by the fascinating Reds, are admired by numerous spectators: it’s impossible to remain indifferent seeing the 74 Ferraris standing together. At 6pm the cars go on their way to Desenzano sul Garda: the 512 BB fascinates with its massive rear tyres and one of the numerous sports cars is a 456 with a blue livery on the road along the lake. The race goes on and more and more spectators can be seen following the cars. The heavy rain accompanies the cars Verona via Sirmione and Peschiera del Garda. In the city of Romeo and Julia the check point ramp causes some difficulties for the most extreme Ferraris like the F40, but the cars passing in front of the Arena are a truly exciting sight.
When night falls the cars arrive in the city centre of Ferrara at around 11pm under the applaus of the spectators watching the cars just like top models on a catwalk.
The first stage ends in Ravenna, which is also the starting point of the second, which will lead the Ferraris to the eternal city. 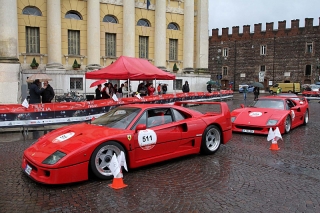 Maranello, 2nd May 2013 – The Ferrari Tribute to Mille Miglia, a re-enactment for Prancing Horse owners of the world’s most famous endurance road race, gets underway once again this year on May 16th. Crews aboard post-1957 Ferraris will parade their cars down Brescia’s Viale Venezia to open the 2013 edition of the historic event. The competitors then continue along some of Italy’s most beautiful roads, following the traditional route to Rome and back, and cross the finish-line at Brescia on the night of Saturday, May 18th.The Ferraris taking part come from more than 20 different nations worldwide and are divided into two separate categories: Classic for cars built between 1958 and 1984, and those built between 1984 and the present. The cars represent a marvellous compendium of Ferrari’s extraordinary production from every era and were selected by a special committee chaired by Ferrari’s Vice Chairman, Piero Ferrari.The Ferrari Tribute to 1000 Miglia follows exactly the same 1500km route as the main race, starting from Brescia and with regularity trial stages in Desenzano del Garda, the Autodromo di Imola, Rome, Florence and the Fiorano Circuit before finishing back at Brescia once more.The Ferrari Tribute to 1000 Miglia cars leave a few minutes ahead of their historic counterparts, providing the thousands of enthusiasts that throng the route, with an absolutely unmissable spectacle.
Advertising
Recent Posts
Support Mitorosso.com
Archives
Advertising