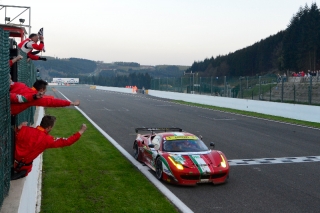 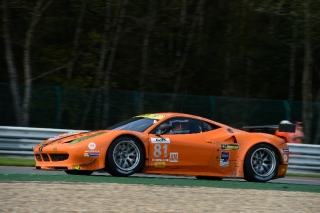 Maranello, 5 May –Great satisfaction at Maranello following a very nice double win for the 458 GT2 in the Spa 6 Hours, the second round of the World Endurance Championship. Prancing Horse cars won in the GTE category with AF Corse’s Gimmi Bruni and Giancarlo Fisichella, as well as in the GTE Am class courtesy of Rui Aguas, Enzo Potolicchio and Matteo Malucelli (8Stars, run by AF Corse.) A great day was rounded off with a third place for Kamui Kobayashi and Toni Vilander in the senior category.The two wins came about in very different circumstances. In the GTE Am, the 8Stars trio took the lead right from lap 5 and were never headed on their way to crossing the line with a lap in hand over the closest Aston Martin, but the duo from Rome had a much more tricky and dramatic time. A leitmotiv of the race was the penalties handed out by the Race Director, with Fisichella having to come in twice to take a stop-go.Choices made on the AF Corse pit wall after an hour’s racing would prove decisive, as the team brought car 51 in just as the Safety Car went out on track. In the end, Bruni was able to fight off the vehement attentions of the Senna-Makowiecki-Bell Aston Martin, which in turn was having to fend off Kobayashi and Vilander, who had led for much of the race. “From inside the cockpit it was a very nice race and I think that was also the case for those watching from the stands or on television,” said Bruni. “One of the keys to our win was the tyres: the new Michelins soon proved to be well adapted to our car. Honestly, I think the Aston Martins are strongest at the moment, especially as they manage to do longer stints than us and so this win is even more important. Now we must work hard to prepare as well as possible for the Le Mans 24 Hours.”

Enzo Potolicchio was justifiably pleased to have taken a great win with his team-mates. “It’s fantastic to win here and to be part of this team in which 8Star is working with AF Corse. I am learning so much and everyone is very helpful: now I can’t wait to race at Le Mans, where I expect Aston Martin and Corvette to once again provide very strong opposition.”

A strong weekend for the 458 in GT racing was completed by a good result in the opening round of the Italian GT Championship, held today at Misano. MP 1 Corse got the Lancieri-Ciro duo onto the podium twice, with a third place in Race 1 and a second in Race 2. Less fortunate was the sister car of Maino-Venturi which had to retire in Race 1, making up for that in part with a fourth place in the second race.

Spa-Francorchamps, 4th May – At the second round of the 2013 FIA World Endurance Championship, the GT categories thrilled to the finish. Had the WEC 6 Hours of Spa-Francorchamps (which ran throughout the six hours under clear skies and bright sunshine) lasted one lap more, several results might have been different!As the chequered flag flew in Belgium, it was a Ferrari victory in both classes and the result sees Ferrari take a six point lead over Aston Martin in the classification for the World Endurance Cup for GT Manufacturers. AF Corse’s No.51 Ferrari won the GT Pro class, while the No.81 8Star Motorsports 458 Italia clinched victory in GT Am.Gianmaria Bruni and Giancarlo Fisichella won the Pro class by 9 seconds over the No.98 Aston Martin Racing Vantage V8 of Bruno Senna-Frederic Makowiecki –Rob Bell, but the gap might have been considerably larger had the Ferrari pairing not had to serve two stop/go penalties for on track infringements during the race. Third in class was the No.71 Ferrari of Kamui Kobayashi and Toni Vilander, who led for a good many laps, but who finally lost out to their sister AF Corse car at the last round of pit stops. They were on a charge to the end though, and missed a second place finish by just one second at the chequered flag.

In GT Am, the race belonged to the AF Corse-managed No.81 8Star Motorsports Ferrari almost from the start of the race green flag. It took WEC debutant Matteo Malucelli just three laps to pass the pole-sitting No.95 Aston Martin Vantage of Nygaard-Poulsen-Simonsen and he, together with his teams mates Enzo Potolocchio and Rui Aguas, never relinquished their hold on the lead. The orange 8Star Ferrari survived unwanted attention from an LMP1 car and had to pit to replace a broken wing mirror, but it didn’t phase the team unduly. 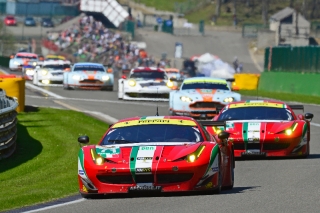 Spa-Francorchamps, 4th May – After a tense qualifying session in Belgium for the 6 hours of Spa World Endurance Championship (WEC) race the No.51 Ferrari of Bruni and Fisichella missed on the GT Pro pole by just 0.042 seconds to the No.98 Aston Martin recording an average time of 2:19.811.The new qualifying regulations for 2013 state that two nominated drivers (the nominations being entirely at the discretion of the team) from each crew must set at least two timed laps during qualifying. The average of the four best lap times (the best two of each driver) will serve as the reference time for establishing the grid.Yesterday Bruni stayed out on track till the dying seconds of the session, under warning from the Race Director for exceeding the track limits, he made sure he posted the most competitive time possible. The second AF Corse Ferrari 458 Italia of Kobayashi and Vilander (No.71) will line up third in class posting an average time of 2:20.089.

In the GT Am class it was again the battle of Ferrari v Aston Martin, with the 8 Star entered No.81 car missing out on the class pole with a time of 2:20.089 – they will line up 2nd in class. The No.61 Ferrari from AF Corse will line up 6th in class followed by the No.57 car of Krohn racing 8th in class with the second amateur AF Corse car No.54 in 9th position.

The 6 hour race starts today at 2:30pm Local time (1:30pm BST) and with the technical Spa circuit and the regions notoriously unpredictable weather – anything could happen. Tune in to follow the progress of the 6 Ferrari 458 Italia on Twitter @FerrariRaces 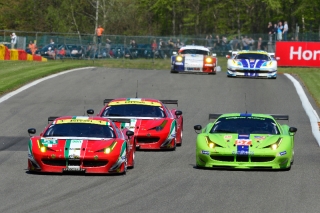 Maranello, 2nd May – No fewer than six Ferrari F458 Italia will line up this weekend at the legendary Spa race circuit in Belgium to contest the 6-hour World Endurance Championship (WEC) event.

The two cars leading the charge for the brand will be the AF Corse cars in the GT Pro category. The duo that dominated the class in 2012, Giancarlo Fisi­chella (ITA) and Gianmaria Bruni (ITA), are ready to fight for the top spot in the No. 51 car; in the opening race at Silverstone, in the middle of April, some unlucky incidents affected their race and they finished in 5th place.

On the other hand, at the same event the No.71 car of Kamui Kobayashi (JPN) and Toni Vilander (FIN) opened its championship in great style. Making their  debut as teammates they took second place even though it was the first endurance race in a GT for Kobayashi.

In the GT Am category AF Course will run two Ferrari 458 Italia GT2;  in the No. 54 are Howard Blank (USA), Yannick Mallegol (FRA) and Jean Marc Bachelier (FRA). The WEC represents a huge  step up for the trio who are moving up from European GT racing. The second car carrying No.61 will be driven by Jack Gerber (ZAF), Marco Cioci (ITL)  and Matt Griffin (IRL).

Also receiving technical support from AF Corse will be the GT2 No.81 of the 8 Star Motorsport team with the drivers Enzo Potolicchio (VEN), Rui Aguas (PRT) and Matteo Malucelli (ITA). At Silverstone the trio finished an impressive third place despite a collision with another car on the penultimate lap.  Completing the Ferrari force at Spa will be the No.57 car run by Krohn racing and driven by Tracy Krohn (USA), Niclas Jӧnsson (SWE)and Maurizio Mediani (ITA).

The race can be viewed live online at www.fiawec.com or heard live on the radio via Radiolemans.com. For more information TV coverage worldwide www.fiawec.com/en/news/-worldwide-tv-coverage-increases-for-wec_1063.html