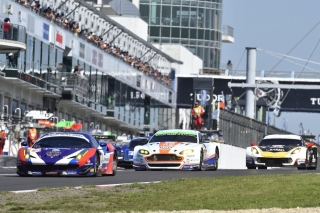 FIA WEC: all the emotions from the 6 Hours of Nurburgring 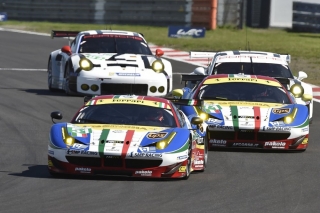 Nurburg, September 2 – Relive all the emotions of the 6 Hours of Nurburgring, fourth round of theWorld Endurance Championship (WEC), with the great victory of SMP Racing’s Ferrari number 72 of Andrea Bertolini, Viktor Shaytar and Aleksey Basov, the podium of the 458 Italias number 71(Calado-Rigon) and 83 (Collard-Perrodo-Aguas), both fielded by AF Corse, and the disappointment of crew of car number 51, the world champions ”Gimmi” Bruni and Toni Vilander, stopped by an electronic failure while they were leading. 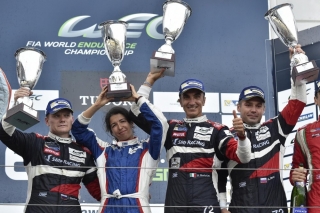 Nurburg, 30 August – The crews of the Ferrari customer teams clinched a win and two podiums at the 6 Hours of Nurburgring on Sunday. Maranello cars did less well than hoped for in the GTE-Pro, while recording excellent results in the GTE-Am where SMP Racing, the winning team at the Le Mans 24 Hours, repeated their success in Germany today.

GTE-Pro. Starting from the front row, the GTE-Pro class Ferraris easily held onto the top two positions. However, after seven laps the 458 Italia no. 51 of AF Corse team driven by “Gimmi” Bruni suddenly had the wind taken out of its sails. The world champion was forced to pull off track, but did eventually manage to reach to the pits where his electronics problem was fixed. From then on Bruni and Toni Vilander did their best to pull back and in the end finished with a seventh place. Car no. 71 returned to the pit during a neutralisation of the race behind the safety car, due to the failure of no. 51 and slipped to second place behind Porsche no. 91 of Lietz-Christensen. Halfway through the race, Calado and the driver of Porsche no. 92, Frederick Makowiecki, fought a long battle that ended when the German car collided with him at the start of a neutralisation phase. Calado lost nothing there thanks to the yellow flag, but as a result of the incident Rigon suffered a puncture shortly after and the Ferrari had to cede the lead to car no. 92. However, third place secured important points in the drivers, teams and manufacturers championships.

LMGTE-Am. Their triumph at the Le Mans 24 Hours had obviously given a real boost to the crew of Ferrari 458 Italia no. 72 of SMP Racing team, who were among the leaders throughout and in the end managed to repeat their recent success in the French classic. Andrea Bertolini played a brilliant part in this with his decisive overtake of Aston Martin no. 98 on the first bend. In the last stint the Italian handed the car to Viktor Shaytar who completed a number of fine laps to consolidate first place on the car driven by Dalla Lana-Lamy-Lauda. AF Corse’s car no. 83 completed Ferrari’s podium celebrations in third place, after a great drive by an in form François Perrodo, who twice overtook Patrick Dempsey and his Porsche. The championship resumes in three weeks with the 6 Hours of the Circuit of the Americas in Austin, United States. 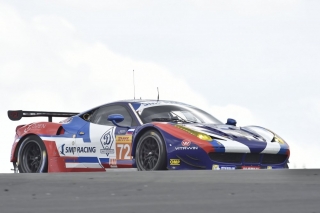 Nurburg, 29 August – Ferrari enjoyed a good qualifying session at the 6 Hours of Nurburgring on Saturday afternoon. Maranello customer team cars monopolised the front row in the LMGTE-Pro class, while in the LMGTE-Am category SMP Racing’s 458 Italia no. 72 claimed its first pole of the season.

LMGTE-Pro. Ferrari will fill the entire front row in the LMGTE-Pro class for the first time this season. Toni Vilander opened the qualifying in car no. 51, immediately clocking up a good time of 1:54.391. However, he was still beaten by two Aston Martins. Toni then handed the 458 Italia to teammate “Gimmi” Bruni who was faster (1:54.159) and, with the help of a series of Aston Martin driver errors, managed to clinch pole position in an average time of 1:54.275. The world champions will line up alongside teammates Davide Rigon and James Calado. The drivers of Ferrari no. 71 did well to be competitive again after a very difficult second free practice session. Davide set the fifth fastest time at that point (1:54.402) handing the car over to an on form James. He clocked a slightly quicker 1:54.258 to take second place (1:54.330) despite the presence of a slower Aston Martin in the final sector. The Ferraris finished ahead of the Aston Martin no. 95 (Nygaard-Sorensen, 1:54.498) and the Porsche no. 92 (Pilet-Makowiecki, 1:54.688). The Porsche of Dumas-Jani-Lieb took the overall pole position in a time of 1:36.473.

LMGTE-Am. In the wake of their triumph in the Le Mans 24 Hours, the crew of SMP Racing team’s Ferrari 458 Italia no. 72 clinched their first pole of the season. Russians Viktor Shaytar and Aleksey Basov clocked up 1:56.528, ahead of Aston Martin no. 98 (Dalla Lana-Lamy-Lauda, 1:57.060). Andrea Bertolini opted not to drive, as he has done previously this year, so he will be able to drive in the final part of the race where he will use his 10 plus years of experience to try to achieve the best possible result. The other Ferrari in this category, the AF Corse’s no. 83 in the hands of Francçois Perrodo, Emmanuel Collard and Rui Aguas, finished fourth in 1:57.246, behind Porsche no. 77 (Dempsey-Long-Seefried, 1:57.232). The 6 Hours of Nurburgring will start tomorrow at 13 CET.

Toni Vilander, driver car no. 51 (pole position LMGTE-Pro): “This pole position is a lovely way to come back after the holidays and after a difficult Le Mans 24 Hours. Ferrari, Michelotto and AF Corse did a great job. The car was well balanced and the tyres worked very well. The margins are always very small and this shows just how tight this category is. We have completed our programme without overdoing it and we have taken advantage of others who dared perhaps too much, ending up off the track. However, the difficult thing is the race, tomorrow.”

“Gimmi” Bruni, driver car no. 51 (pole position LMGTE-Pro): “I am very happy, also because my lap wasn’t perfect: I found an Aston Martin in my way that was returning to the pit and ended up off line losing a few tenths. The double in the starting grid shows that our work is heading in the right direction, but we have achieved nothing yet. Ninety-five percent of the work is still to be done with the race tomorrow.”

Davide Rigon, driver car no. 71 (2nd LMGTE-Pro): “I am happy with the overall result, especially after an anything but positive second free practice session. I personally had not been able to test the car on low fuel and I had to do all the work this morning. It’s a shame that the tyres didn’t allow me to complete a second lap pushing from start to finish, otherwise I could have improved further and maybe even nabbed pole. The opposition is as competitive and aggressive as usual, especially the Aston Martins, and this is why we mustn’t underestimate anyone, but after the best qualifying of the season we can only be confident.”

James Calado, driver car no. 71 (2nd LMGTE-Pro): “I’m happy today because that was the best qualifying of the season. Unfortunately I wasn’t perfect on my fast lap because I found myself in front of a slower Aston Martin. We could have won pole position with a bit of luck, but this counts for little. Tomorrow’s race is six hours long and our aim is the same. The car was perfect, very stable and responsive to the demands of the driver and this bodes well for tomorrow’s race.”

Andrea Bertolini, driver car no. 72 (pole position LMGTE-Am): “Congratulations to my teammates. They did a really great job. In a sense though I expected it. Yesterday when we saw Aleksey on such form, also due to the tests we did here a month ago, we realised that we could achieve a great result. As we know, in this category the bronze driver can make the difference. We opted for an aggressive strategy by mounting new tyres and it paid off. They took pole and with it an important championship point. I am very proud of the guys racing with me and I plan to give them a hand in the race to try to achieve a great result. The race is long, hard and you have to stay focused, but we are aiming for the top.” 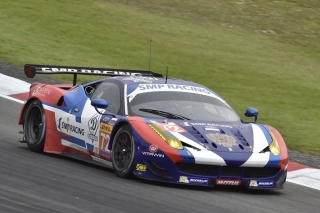 Nurburg, 28 August – The drivers of the Ferrari customer teams were put through their paces on Friday at the Nurburgring for the fourth round of the World Endurance Championship. The free practices were affected by rain in the first session and kissed by the sun in the second 90 minutes.

GTE-Am. In the GTE-Am class the Ferrari no 72 of SMP Racing team, crewed by the winners of the Le Mans 24 Hours, set the fastest time of the day of 1:56:238 in the afternoon session. The car driven by Andrea Bertolini, Aleksander Basov and Viktor Shaytar covered a total of 56 laps. The 458 Italia no. 83 of AF Corse, which was fastest in the morning with 1:57:876, managed 1:57:157 in the afternoon but dropped to fourth in the rankings. The car covered a total of 71 laps. The third practice session is due at 9.30am on Saturday with qualifying at 2pm.

FIA WEC – Ferrari to race at Nurburgring with four cars 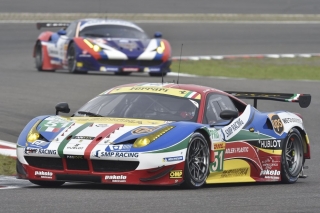 Nurburg, 27 August  – More than two months after the Le Mans 24 Hours, the World Endurance Championship (WEC) is revving up for the Nurburgring, the only new race on this season’s calendar. However, this track is well known to everyone (world champion Toni Vilander, teammate of “Gimmi” Bruni in the AF Corse team Ferrari, presents the circuit in this video) because it is a great motorsport classic. Races cannot be held on the legendary 20 km plus Nordschleife for safety reasons, but the short version of the German track promises thrills and entertainment.

GTE-Pro.  As usual two Ferraris will be competing in the GTE-Pro class, both entered by the AF Corse team. World champions “Gimmi” Bruni and Toni Vilander will be alternating in car no. 51, after teaming up with Giancarlo Fisichella at Le Mans, while Davide Rigon and James Calado will be in no. 71, fresh from second at the 24 hours, and without the addition of Olivier Beretta. Bruni and Vilander currently top the standings with a third place in the Sarthe marathon and a win in the first race of the season at Silverstone.

GTE-Am. In the GTE-Am class all eyes will be on the victors at the Le Mans 24 Hours: Andrea Bertolini, Victor Shaytar and Andrey Basov, crew of the 458 Italia no. 72 of SMP Racing. The winners of the famous French endurance race will be facing a battle hardened group of opponents, starting with fellow Ferrari drivers François Perrodo, Emmanuel Collard and Rui Aguas in the AF Corse car no. 83. We should also keep an eye on the crew of the Aston Martin no. 98, Paul Dalla Lana, Mathias Lauda and Pedro Lamy, who will certainly want to make up for Le Mans where they crashed while leading less than an hour from the finish. This car has won the two six-hour races held so far this season.

History. As mentioned, the Nurburgring track is a new entry to the World Championship but is a great classic where some historic GT World Championship races have taken place. Ferrari has won 19 times on the Nordschleife but is still chasing its first world championship win on the short circuit. Its first success on the old track came in 1953, the first world championship season, with Alberto Ascari and Giuseppe Farina in the works375 MM Vignale Spyder. The last one came in 1973 with the works 312 PB of Jacky Ickx and Brian Redman. Qualifying takes place on Saturday at 2pm while Sunday’s race will start at 1pm. Real-time updates will be available on @FerrariRacing while the last hour of the race will be broadcast live on the Eurosport tv channel.