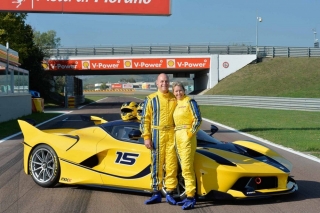 Maranello, 28 August 2015 – Since he bought the 599 XX auctioned to raise funds in the wake of the Emilia earthquake disaster in 2012, we’ve all known that Benjamin Sloss is a very generous guy. But now he’s proved his big-heartedness once again by presenting his wife, Christine, with a truly unique birthday gift.

Ben told Christine he would be bringing her to Fiorano to do a little lapping in their 599 XX as a birthday treat. And he did just that. But that was far from all he had planned.

In fact, when they arrived at the track, Christine found a beautiful FXX K, clothed, like all their Ferraris in a yellow livery, waiting for her. Naturally enough Christine, who is also a real petrolhead and fine GT driver, lost no time in getting into her racing suit and putting her latest acquisition through its paces on the track.

Christine found the FXX K incredibly communicative, responsive, and confidence inspiring, and extraordinarily fast. After just a few laps she was running 1’20”, with a passenger on board, very close to the Fiorano FXX K lap record!