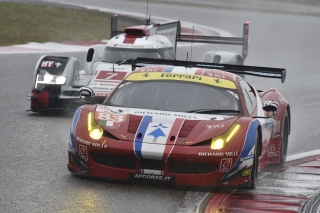 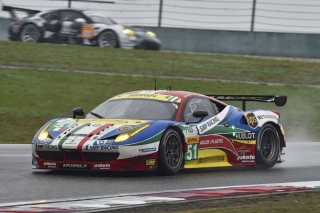 Shanghai, 1 November – The rain, which had threatened to spoil Ferrari’s plans two weeks ago at Fuji, certainly succeeded on Sunday in Shanghai where, after monopolising qualifying, the 458 Italias in the GTE-Pro class only managed a podium finish, with car no. 51 of Gianmaria “Gimmi” Bruni and Toni Vilander taking second. Car no. 71 of Davide Rigon and James Calado came fourth. Victory went to the Porsche of Richard Lietz who is closing in on the Drivers’ title, while Ferrari holds first place in the Manufacturers’ standings with just one race to go, the 6 Hours of Bahrain at Sakhir on 21 November.

GTE-Pro. The race kicked off in light rain, which quickly became heavier. Toni Vilander initially managed to hold the lead in car no. 51 while no. 71, with Davide Rigon at the wheel, was bumped by Porsche no. 92 and lost three positions. Porsche took advantage of the rain to secure first and second, with the no. 91 of Richard Lietz and Michael Christensen powering ahead. Behind the Ferraris continued to fight it out with Porsche no. 92. At the two-thirds mark no. 71, with James Calado, suffered a puncture that ended any hopes of a podium finish. The rain finally stopped falling two and a half hours from the end, and about 60 minutes later it was possible to fit slicks tyres. At that point Vilander handed over to “Gimmi” Bruni who fought back to within shouting distance of no. 92. At the final pit stop, the Porsche changed tyres and driver, while the Ferrari with Bruni simply refuelled and made its exit ahead of its rivals to secure a second place important for the Constructors’ championship where the Prancing Horse remains in command. However, Lietz’s win combined with the fourth place of Rigon and Calado complicates the drivers’ standings. Both crews are still in contention but only Lietz’s withdrawal could reverse the situation in Bahrain.

GTE-Am. The GTE-Am class saw a day marked by penalties, but also the domination of the 458 Italias. Victory went, for the first time this season, to car no. 83 of AF Corse crewed by François Perrodo, Emmanuel Collard and Rui Aguas who were strongest even after a drive through due to an infraction at the pit stop. The three crossed the line ahead of Aston Martin no. 98 driven by Paul Dalla Lana, Pedro Lamy and Mathias Lauda, and Ferrari no. 72 of SMP Racing driven by Victor Shaytar, Aleksey Basov and Andrea Bertolini, also penalised by a stop&go for making a pit stop when the pitlane was closed (in a Full Course Yellow phase). The result of Sunday’s race means that only Ferrari crews will be fighting for the title in Bahrain, with no. 72 enjoying a 19-point lead. 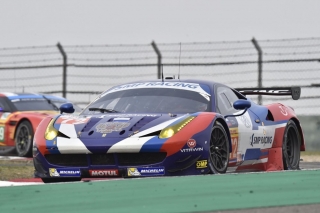 Shanghai, 31 October – Ferrari 458 Italias of AF Corse will have the entire front row to themselves in the 6 Hours of Shanghai penultimate round of the World Endurance Championship (WEC). The no. 51 of Gianmaria “Gimmi” Bruni and Toni Vilander is due to start the GTE-Pro on Sunday in pole, followed by teammates Davide Rigon and James Calado. The two 458 Italias in the GT-Am enjoyed a less successful qualifying, with AF Corse no. 83 car of François Perrodo and Emmanuel Collard in fourth, ahead of SMP Racing no. 72 driven in qualifying by Aleksey Basov and Victor Shaytar.

GTE-Pro. The GTE-Pro qualifying kicked off with Toni Vilander and James Calado in Ferraris no. 51 and 71 of AF Corse. The drivers did a single timed lap each, recording respectively 2:02.500, first position, and 2:02.627, second. “Gimmi” Bruni and Davide Rigon then put on a spectacular show in the second part of the 20 minutes session. In fact, the driver of car no. 51 completed an almost perfect lap, finishing in 2:01.987, the first ever GT car to lap in under 2:02 in Shanghai. The aggregate time was 2:02.243. Then Rigon clocked 2:02.390, which secured a second place for car no. 71 in a time of 2:02.508. Although the Ferraris enjoyed an extremely successful qualifying no one should be under any illusions about the race, which is long, highly demanding on cars and tyres and like the last race at Fuji, could very well be affected by rain at least in the early stages. 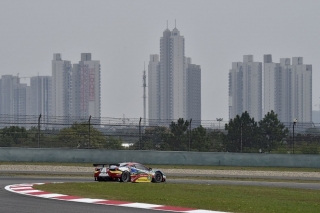 Shanghai, 30 October – The four 458 Italias of the Ferrari customer teams have arrived Shanghai, where the free practices for the penultimate round of the season are underway today. In the GTE-Pro class the battle with Porsche for the Constructors’ and Drivers’ titles is more open than ever with each point potentially crucial. However, Ferrari leads the way in the Am class where it can hope to wrap things up in China with one round to go.

GTE-Pro. Ferrari tops the manufacturers’ standings in the GTE-Pro class, 13 points ahead of Porsche, but the positions are reversed in the drivers’ championship. Indeed, the German company’s captain, Richard Lietz, has a seven-point lead over Davide Rigon and James Calado in Ferrari no. 71 AF Corse, and a 16.5-point advantage over no. 51 driven by Gianmaria “Gimmi” Bruni and Toni Vilander. The two won the last race in Japan but don’t have good memories of last year’s WEC round in Shanghai: their race ended after 10 laps, when Bruni was involved in an accident with a prototype that had broken down.

GTE-Am. In the GTE-Am class Ferrari no. 72 crewed by Andrea Bertolini, Aleksey Basov and Victor Shaytar has a 29-point lead over fellow AF Corse drivers, Emmanuel Collard, Rui Aguas and François Perrodo and a 36-point advantage over the Porsche of Marco Seefried, Patrick Dempsey and Patrick Long. So if they finish ahead of their two closest pursuers the SMP Racing team crew would win the title with a race to spare.

History. Ferrari boasts two victories in Shanghai, one in the WEC GTE-Am class, claimed in 2013 by the 458 Italia of 8Star Motorsport with Rigon, Aguas and Enzo Potolicchio and another in the Asian Le Mans Series’ 3 Hours in 2014, when Clearwater Racing triumphed in a car driven by Weng Sun Mok, Keita Sawa and Matt Griffin.