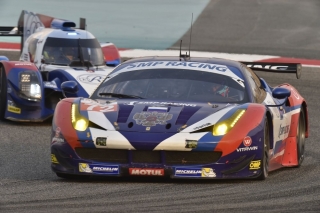 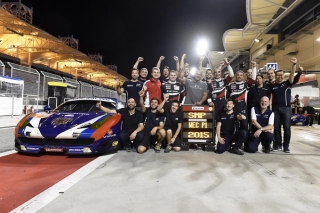 Sakhir, 21 November – Ferrari experienced both joy and disappointment on Saturday in the 6 Hours of Bahrain, the final round of the 2015 World Endurance Championship (WEC). The joy was expected, with the Ferrari no. 72 trio of SMP Racing winning the GTE-Am title. The disappointment came with defeat in the constructors’ championship due to a glitch on the 458 Italia no. 71 of James Calado and Davide Rigon.

GTE-Am. In the GTE-Am class car no. 72 of SMP Racing concentrated on playing safe. Andrea Bertolini drove first and successfully avoided any problems and accidents before handing over to Aleksey Basov. Victor Shaytar took the wheel during the middle part of the race and continued to keep a handle on the situation staying in contact with the only title rival, the crew of Ferrari AF Corse no. 83, Emmanuel Collard, François Perrodo and Matteo Cressoni, who replaced the injured Rui Aguas. Bertolini completed the race, which was won by the Aston Martin no. 98 of Mathias Lauda, Pedro Lamy and Paul Dalla Lana. The main thing though was the title triumph of Bertolini, Basov and Shaytar, who enjoyed an excellent season with wins at the Nurburgring, Austin and, most importantly, at the Le Mans 24 Hours.

GTE-Pro. The bad luck suffered by one of the two Ferraris in the GTE-Pro class meant the Prancing Horse lost out on the Constructors’ title. Car no. 51 of Gianmaria “Gimmi” Bruni and Toni Vilander, with the Finn at the wheel, held top spot at the start, while James Calado in no. 71 pulled off an incredible comeback. Setting off from second last in the grid, he overtook seven cars over the first two laps to land in sixth place and then climbed to fifth. Porsche no. 92 with Patrick Pilet and Frederic Makowicki took first 5 hours and 20 minutes from the end and kept its lead even after the first pit stop in which the AF Corse mechanics performed superbly to put both cars on track in front of the Aston Martins, in second and third position. The third stop came at just over the halfway mark and at that point something went wrong with car no. 71, which lost its left front tyre four laps from the pit stop. Davide Rigon went straight back to the box to limit the damage, but the 458 Italia GTE resumed in sixth, which meant that Ferrari lost its five-point lead in the standings. The no. 92 Porsche won the race ahead of Ferrari no. 51 and the Aston Martin no. 97 of Darren Turner and Jonathan Adam. 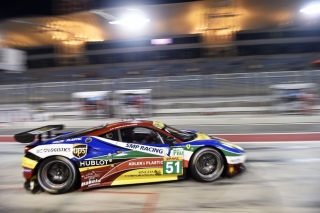 Sakhir, 20 November – Heat, fast-changing track conditions and a blackout two minutes into the session which delayed the whole programme by half hour. Qualifying for the 6 Hours of Bahrain, last round of the WEC championship which will be starting tomorrow at 3 p.m. local time (1 p.m. CET), were anything but easy to interpret. However, the 458 Italia confirmed its competitiveness in GTE-Pro class even if car no. 71 car will have to start from 7th after James Calado’s best lap was cancelled for exceeding track limits in the penultimate turn of the track.

GTE-Pro. Unexpected event at the start of the 20-minutes qualification session: the lighting of the Sakhir track suddenly failed; only the pit lane remained lit by the floodlight. The problem was solved in just under half hour and the session was restarted. The heat, the track’s changeable conditions, and tyre wear made it very difficult to cover two flying laps. Davide Rigon on the 458 Italia number 71 of AF Corse clocked 1’58”020, second best time after that recorded by Sorensen on Aston Martin, while Toni Vilander came in at 1’58”157. James Calado and “Gimmi” Bruni then took over the controls of the two respective cars. The English driver was very unlucky, finding himself stuck in traffic during his first attempt. James slowed down lapping in 2’11” to then charge again in the following lap, but he was hindered by traffic again and, with tyres already stressed out, recorded a time of 1’58”740, which, however, put him temporarily in pole position with a combined time of 1’58”380. On the other hand, “Gimmi” stopped the clock at 1’58”508, to record a combined time of 1’58”347 and thus earn the pole position, the third for the reigning champions, the fourth of the season for Ferrari. However after the qualifying James’ lap was cancelled as he didn’t respect track limit at turn 13: so the 71 car will have to start from penultimate spot on the grid.

GTE-Am. In the GTE-Am class, the fastest car was the Aston Martin of Pedro Lamy, Mathias Lauda, and Paul Dalla Lana with 2’00”522, ahead of the Chevrolet of Ruberti-Roda-Poulsen. Third place went to the 458 Italia number 72 of the SMP Racing team, driven first by Aleksey Basov and then by Andrea Bertolini who recorded a combined time of 2’00”988 and today will be able to rely also on Victor Shaytar. Fifth spot went to car number 83 of François Perrodo and Emmanuel Collard who got a combined time of 2’01”796. Today they will also have Matteo Cressoni driving. The task for them is to make up the 19 points that separate car 83 in the standings from their brand mates of car 72.

A special helmet for “Gimmi” Bruni in Bahrain 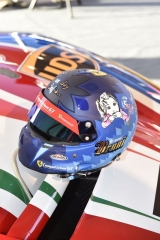 Sakhir, 19 November – Gianmaria “Gimmi” Bruni will be racing with a special helmet in Bahrain. It features a very sensitive design full of colors and life. “Gimmi” will wear it for the last round of Word Endurance Championship championship (WEC): “My greatest wish is that Sofia and all the others little girls with Rett Syndrome will find the cure very soon”. To help this medical research the helmet will be on sale just after the race on www.gianmariabruni.it and the entire amount of the purchase will be donated to the “One day Sofia” association to contribute the cause of conquering Rett Syndrome that is a rare genetic postnatal neurological disorder. 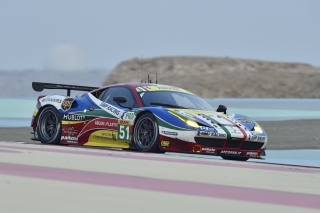 Sakhir, 19 November – The 2015 season of the World Endurance Championship (WEC) closes this weekend. Four Ferraris will be racing, with a Constructors’ championship still wide open, a certain victory in the GTE-Am drivers’ title and a very difficult run in for the GTE-Pro one in what will be the 458 Italia’s final appearance in this category. In 2016 it will be the turn of the new 488 presented at the Finali Mondiali in Mugello less than two weeks ago.

Head to head. The decisive race in Bahrain will as usual see two Ferraris on track in the GTE-Pro class, with the two 458 Italias of AF Corse crewed respectively by “Gimmi” Bruni and Toni Vilander and Davide Rigon and James Calado. The main aim of the two pairs will be to win the race and stay ahead of the two Porsches, no. 91 and 92. The Constructors’ title is at stake, with Ferrari going into the weekend with a slight advantage. However, the four-point margin really is minimal and it will be a real head-to-head between Ferrari and Porsche in which speed and reliability will both play their part. Both Ferrari duos are still fighting for the teams’ and drivers’ titles although it would take the help of rivals, and in particular Richard Lietz, to pull off an unlikely comeback.

Ferrari derby. One thing is already certain in the GTE-Am: a Ferrari crew will win the drivers’ title. Andrea Bertolini, Victor Shaytar and Aleksey Basov lead the standings for now. The SMP Racing team trio has a 19-point lead over AF Corse stable mates François Perrodo and Emmanuel Collard that in Bahrain will be joned by Matteo Cressoni. However, with 26 points up for grabs at the weekend in qualifying and the race, they don’t plan on giving up. The two won the last race in Shanghai and they plan on continuing to damage their rivals. It promises to be an interesting duel.