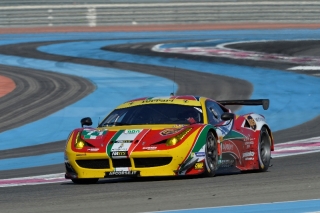 Maranello, 30 March – Two days of official testing for the FIA World Endurance Championship, the series for Sports Prototype and GT cars, ended yesterday at Le Castellet. The first round, in this the third year of the championship, takes place at Silverstone over the weekend of 20 April. There will be six Ferrari 458 Italias entered in a field of 25 cars.

In the LMGTE Pro category, the Ferrari entered by reigning champion team AF Corse will be in the hands of Gianmaria Bruni, Davide Rigon and James Calado and they were second fastest in testing in 1:58.277, behind the Porsche of Marco Holzer, Frédéric Makowiecki and Richard Lietz (1:58.041). Third fastest in the GT battle, first in the GTE-Am category was the Ferrari of 8 Star Motorsport entrusted to Enzo Potolicchio, Paolo Ruberti and Gianluca Roda (1:58.507), followed by the similar AF Corse car with Steve Wyatt, Michele Rugolo and Sam Bird (1:58.545.)