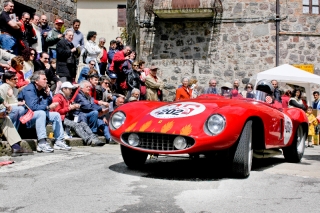 «87 years after the first Mille Miglia in 1927, our unmissable Freccia Rossa event is once again to be staged in Brescia, the city of the Mille Miglia, where this 32nd historical revival of the Race will be held from 15 to 18 May 2014»: commented 1000 Miglia Srl. chairman Roberto Gaburri.

As always, it will be a tremendous opportunity to enjoy the best of Italian hospitality, with artistic and natural settings of extraordinary beauty: the entire course being enlivened by the passage of 430 vintage cars.

This year the Mille Miglia is being organized for the second time by a wholly-owned subsidiary of Automobile Club di Brescia, owner of the brand since the first edition.

In the words of 1000 Miglia Srl managing director Marco Makaus: «Since last year, we have been committed to maintaining the spirit of the Freccia Rossa intact, with an even stronger focus on the tradition of our great Race. This is why the Mille Miglia is organized in close compliance with all the historical and sporting aspects, as well as with high standards of sobriety and safety. All this led us to introduce a number of changes to the 2014 Mille Miglia, whilst also managing to respect the legend we’re called upon to preserve and celebrate».

THE 2014 COURS
The main changes are to the course and consequently to the programme as well: the upcoming Mille Miglia will last an extra day, with an extra leg to be raced on the Sunday morning to the finishing line in Brescia.

The start – from Viale Venezia delle Mille Miglia as always – will be on Thursday 15 May, in Brescia. The course is unchanged as far as Vicenza, where the cars will head north toward Marostica and Bassano del Grappa. The 1st leg will finish in Padova, with all the members of the “caravan” being hosted for the night in Thermae Abano Montegrotto, whence the 2nd leg will start on Friday morning.

The second day, Friday 16 May, will see numerous changes: after San Marino, the participants will continue in the direction of Riccione (instead of cutting inland) and then south along the coast to Loreto and then Ascoli and Teramo.

Passage through L’Aquila will be a gesture of symbolic solidarity, as it was in 1997 when the Freccia Rossa drove past the tents of the earth-quake evacuees in Umbria and in 2013 when it went through quake-stricken Emilia Romagna.

In line with tradition, the 2nd leg will close with a  parade through the heart of Rome.

As on days 1 and 2, the start of the 3rd leg, on Saturday 17 May, will be as in previous years, with the customary passing through Ronciglione, Viterbo, Radicofani and Siena, places strongly associated with the Mille Miglia and much loved by the participants.

After Siena, the road-book will indicate a left turn towards Pisa and Lucca. As in 1947 and 1948, the Freccia Rossa will head back east after passing beneath the Leaning Tower and make for the Futa and Raticosa passes and thence to Bologna. The teams will stay the night in the historic centre of this originally Etruscan city, whence they will set off again on the Sunday morning.

The 4th leg, a new addition to the Race, will go through Modena, Reggio Emilia (missed out last year in favour of the areas hit by the earthquake) and Mantova. Arrival in Brescia, on Sunday 18 May, will be just before lunchtime, with the prize ceremony taking place in the afternoon.

ORGANIZATION
The logistics and organizational aspects of an event like this are very complex, as explained by Andrea Dalledonne, the other managing director of 1000 Miglia Srl: «the numbers alone give an idea of the apparatus set in motion by the Mille Miglia, which is lining up 430 cars this year, a new all-time record, with around 1,600 people (participants and entourages) and involving a further 2,000 in the organization itself, not to mention around 1,500 journalists and other media operators. So we would like to publicly thank everyone involved in helping the Freccia Rossa on its way and contributing towards such an enthralling spectacle of history, sport and culture».

Of the more technical novelties of the 2014 Mille Miglia, mention must be made of the number of time trials, rising to 74, that will go towards drawing up the final ranking.

Further, after an absence of over a decade, the course will include six pre-defined average speed navigation trials. This type of trial – in which drivers must maintain a constant average speed – is not very well known in Italy but is common abroad. The point of this new development is to allow foreign teams, and European ones in particular, to clock up more points, a small gesture in the spirit of the healthy competition and sporting friendship amongst nations that has permeated the Mille Miglia since its very beginnings.

MILLE MIGLIA REGISTRATION
The appeal of the world’s most admired “travelling museum” continues to draw fans from across all five continents. Last year saw 1,575 on-line registrations of teams and cars for the Mille Miglia. People who registered last year weren’t required to repeat the process this year. There have been 995 new registrations bringing the total number of potential competitors, including those from 2013, to 2,570.

Registration for the 2014 Mille Miglia has continued last year’s trend, which was beyond all expectation. Despite the economic crisis, which has certainly affected numbers, the total is practically the same as in 2013, the only difference being the decrease in registrations from Italy, offset by those from abroad (with an extra five countries now being represented).

Excluding applications that were incomplete, without payment or not valid, the number of registrations submitted to the selection committee was 619, from 35 nations, five more than last year. Italy continues to be the biggest contributor, with 143 registrations (albeit down 42 on 2013).

Participation by Germany was also down, with 133 teams (-20), while the United Kingdom was stable with 52 registrations.

There was growth in smaller countries like The Netherlands and Belgium, with 52 and 43 registered competitors respectively. Other countries with registration in double digits include Switzerland (40), the United States (39), Austria (14), Japan (13) and Argentina (12).

Curious minds will note that there were 5 registrations from Liechtenstein, 4 from Luxembourg and 2 from Hong Kong, as well as those from China, Czech Republic, Greece, Isle of Man, Israel, Kuwait, Malta, New Zealand, San Marino, Singapore, South Africa, Sweden, Thailand and United Arab Emirates.

Of all the cars registered, the most numerous marque was Mercedes-Benz with 59 vehicles, followed by Alfa Romeo with 57, Jaguar/SS with 53, Fiat with 46, Lancia with 43, Porsche with 41, Aston Martin with 32, and Ferrari and BMW with 24. The list is completed by another 66 car makers

TEAMS ACCEPTED AND CARS STARTING AT THE 2014 MILLE MIGLIA
The high number of applications created hard work for the committee called upon to select the teams to be admitted to this motoring Olympus. As always, taking part in the Mille Miglia is considered a success in itself: actually finishing it gives a competitor the most sublime sensations, whatever the position in the ranking.

NATIONALITIES OF TEAM PARTICIPANTING IN THE MM 2014

After their intensive work, involving the rigorous application of criteria of merit, the Selection Committee was able to announce the list of cars accepted, whose value in terms of quality, collector’s worth and sporting record is extremely high. Of these, some 67 are cars that took part in at least one of the Mille Miglia speed races (from 1927 to 1957).

To widen the historical value of a fleet of cars that no other vintage car event may boast, the selectors decided to accept, in addition to the 410 vehicles already chosen, another 20 cars, reaching a total of 430, a record: these are models having Mille Miglia characteristics but which for various reasons didn’t compete in the official race years. They will compete for all intents and purposes like all the others but will start in a “Special List”, the only difference being that they will not be assigned a coefficient of merit, so that the race can only be won by models that took part in the race between 1927 and 1957.

TREASURES OF INESTIMABLE WORTH FROM THE CAR MAKERS’ MUSEUMS
Of the many reasons why the Mille Miglia is unrivalled in terms of refinement, exclusivity and prestige, one is its being the rarest travelling museum in the history of the motor car. Once a year, Brescia sees the arrival of treasures of inestimable value that wrote some of the most exciting pages in the history of international motor racing.

Some of the cars taking part will come from the museums of marques like Mercedes-Benz, Alfa Romeo, BMW, Jaguar and Porsche.

The cars that will be lining up at the start in Viale Venezia on the evening of Thursday 16 May belong to 61 different marques, the lions’ share being that of Mercedes-Benz with 45 cars and Alfa Romeo with 41, followed by FIAT with 39, Jaguar/SS with 31 and Porsche with 24 cars.

THE MILLE MIGLIA SUSTAINERS TEAM
The list of Sustainers for the 2014 Mille Miglia has numerous well known names as well as some interesting new faces. “That it has been possible to make the Race a great event and over the years transform it into a brand as well is undoubtedly thanks to both the formidable efforts of the organization team and the support of institutions and government and above all to the contribution made by the many companies which have always decided to help the Freccia Rossa,” says 1000 Miglia S.r.l. marketing manager Roberto Pagliuca.

This year too, the public tender for Automotive Presenting Sponsor of the Mille Miglia was won by Mercedes Benz, which will thus join Chopard, World Sponsor, and UBI Banco di Brescia, Trophy Sponsor, as the event’s main partners.

The Sustainers will also be enriched by the quality contribution from Alfa Romeo, which is once again supporting the project as Gold Sponsor, having won the relative tender. The Main Sponsors are GMH, The Classic Car Trust, Alkatec and Roland Iten. In the Mille Miglia Passion category, on the other hand, they are Kienle, Rubinetterie Bresciane and Alitalia. Lastly, the Mille Miglia Friend sustainers of this year’s Race are J.D. Classics, OMR and Aurelius.

The portfolio of licensing agreements continues to be enriched. In addition to the by now traditional collaboration with Chopard, Official Time-Keeper, and with Alitalia, which uses the name of the Mille Miglia for its loyalty programme, there are new agreements with the French multinational Coty, for a fragrance and a line of cosmetics inspired by the Race, and with the Italian De Rigo, for worldwide distribution (from the start of this year) of a line of sunglasses with the Freccia Rossa logo.

Renewals for 2014 include the agreement with the Brescia-based PMP Advertising, Official Merchandiser of the Mille Miglia, and with the Japanese Forza KK, for La Festa della Mille Miglia, the event being held this year in Japan, from 17 to 21 October.

Full information on the “world’s greatest race” can be found at:

This site has news, info and updates on the Mille Miglia as follows: