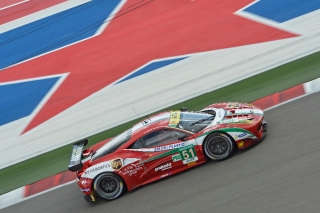 FIA WEC – In Austin a podium to go into the lead 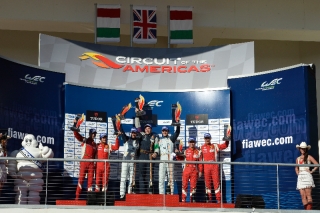 Fisichella-Bruni take second in the race and go top in the championship
Austin, 22 September – Two AF Corse 458 GT2s on the podium in the GTE-PRO class of the Austin 6 Hours, the fifth round of the FIA World Endurance Championship.Gimmi Bruni and Giancarlo Fisichella took second place ahead of the sister car of Toni Vilander and Kamui Kobayashi: they were kept off the top of the podium by Bruno Senna and Frederic Makowiecki, who led for the entire race distance, winning by just under 20 seconds. The Austin result consolidates Ferrari’s lead in the Constructors’ classification, 12 ahead of Aston Martin, and thrusts the Italian duo into the lead of both the team classification (equal on points to Lieb-Lietz) and the Drivers, 3 points ahead of the Austro-German pairing in the Porsche.In the GTE-Am classification, the lowest step of the podium was occupied by the 458 GT2 crewed by Potolicchio-Aguas-Malucelli (8 Starts Motorsport) while the AF Corse car (Gerber-Griffin-Cioci) finished seventh ahead of he Krohn Racing line up of (Krohn-Jönsson-Mediani.)The sixth round of the WEC takes place on 20 October at the Fuji circuit in Japan.

An unforgettable day with AF Corse: thanks Ansys! 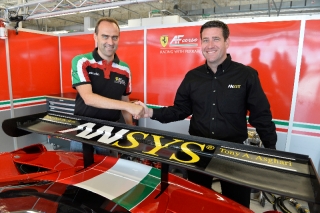 Austin, 22 September- It was a special day for Mike Miller and Luke Koczwara, two young engineers who work alongside Tony Asghari, winner of the “Tweet from the seat,” organised by Ansys to celebrate its partnership with Ferrari in GT racing. In fact, Asghari decided to hand them the prize he won – a day with the AF Corse team at the Austin 6 Hours, even if he didn’t pass over the chance to “sign” the two 458 GT2 cars with his name, as can be seen in the pictures of Amato Ferrari and Gilles Eggenspeller, Senior Fluids Product Manager of Ansys, that go along with this story.

“For an engineer working in the car industry it’s fantastic being able to experience at first hand an important event like this race, practically as part of the AF Corse team along with its drivers,” said Luke and Mike. “It’s like touching the sky. If we are engineers, much of that is down to our passion for sport on four wheels and Ferrari is definitely the highest expression of that.” The experience enjoyed by Asghari and his colleagues with Ansys is very important, not just because it allowed them to be part of this weekend’s event. “In our group, we use Ansys software all the time for our applications, mainly linked to thermal analysis and vibration dynamics: it gives our work added value, just as I am sure it does for Ferrari. And just as Ferrari expresses the state of the art in the field of the automobile, with its road and sports cars, so too Ansys represents the most powerful and reliable computer simulation tools in the automotive field. For us, it has been very interesting and fun to study the simulation of air flow over the profile of a Formula 1 car, the work that resulted in us winning this competition!

“Thanks to Ansys, Ferrari and AF Corse, we have really enjoyed an unforgettable day, in a very professional atmosphere, but at the same time, felt like one big family,” concluded the two engineers in unison. “Oh and a special thanks to Tony who let us come here instead of him J!”

Austin: important qualifying for the 458 GT 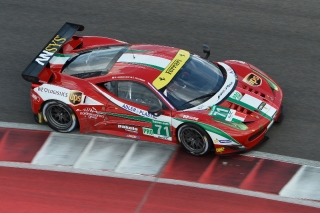 Maranello, 21 September – It was a day of important qualifying sessions for the 458 GT in Austin/Texsas.

This weekend in Austin sees the fifth round of the FIA World Endurance Championship and this afternoon, qualifying was on the agenda. In the GT-Pro category, the two AF Corse 458 GT2 cars finished fourth with Vilander-Kobayashi and seventh with Fisichella-Bruni. Pole position went to the Aston Martin of Senna-Makowiecki. A top spot for Ferrari came in the GTE-Am class, with Aguas-Potolicchio-Malucelli (8 Stars Motorsport) while the AF Corse car with Gerber-Griffin-Cioci came third.