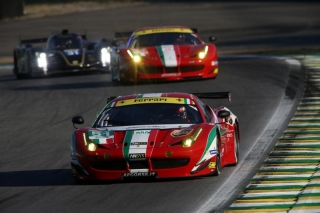 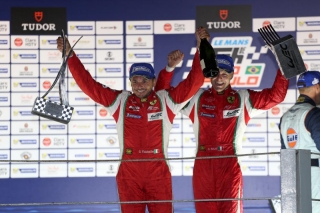 Sao Paulo 2 September – A large crowd, extremely close racing, heartache, fires and accidents were to all feature in the 6 hour World Endurance Championship race in Sao Paulo – the AF Corse Ferrari took its second victory of the season.

The #51 458 Italia of Gianmaria Bruni and Giancarlo Fisichella was involved in a nose-to-tail battle for the full 6 Hours of São Paulo with the #97 Aston Martin Vantage.  Just 1.4 seconds separated the two cars at the end of 6 hours of hard racing and the result for both partly compensated for the misfortune of their different Pro team mates. The No.71 AF Corse Ferrari was involved in a huge accident which destroyed the rear end of the 458 Italia – driver Toni Vilander was lucky to escape unharmed in any way.

Fisichella and Bruni’s victory means they are in third position in the championship fight just one point behind second position at this midpoint of the eight round season.

In LMGTE Am, the Aston Martin Racing claimed the win one lap ahead of the #81 8Star Motorsport Ferrari 458 Italia of Enzo Potolicchio, Rui Aguas and Davide Rigon, the young Italian making an assured debut in the FIA World Endurance Championship.  Porsche was the third manufacturer to mount the podium in the category.

These results mean that in the battle for the FIA Endurance Trophy for LMGTE Am teams, IMSA Performance Matmut, who finished fourth in class today, have had their lead reduced.  They now have 76 points with both 8Star Motorsport and Aston Martin Racing on 74 points.