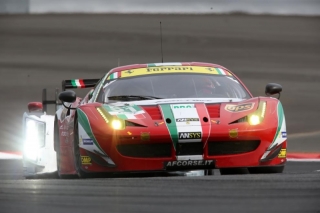 On the podium in Japan 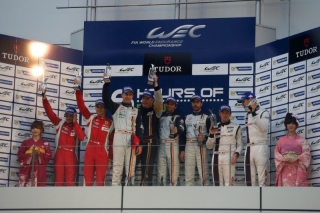 Maranello, 20 October – Fuji was the scene of the seventh round of the FIA World Endurance Championship where rain played a significant part in the outcome. The weather was terrible all day long and, despite the best efforts of the organisers, the 41,000 spectators who braved the elements to come to the circuit over the weekend, were denied the spectacle they had hoped to see. Only 16 laps were run, split into three sections, all run behind the safety car: when the race was interrupted for a third time, the Race Director declared the race over. At the time, the 458 GT2 driven by Giancarlo Fisichella and Gimmi Bruni, was in second place behind the Aston Martin of Turner-Mücke-Makowiecki: the Italian duo thus made it to the second step of the podium. Less fortunate was the other AF Corse crew of Kamui Kobayashi and Toni Vilander, as they were unable to take part in qualifying because of a fuel pump problem. They were classified fifth, ahead of just one car, an Aston Martin which had gone off the track in the opening laps. It was a great disappointment, especially for Kamui, who so wanted to do well in front of his home crowd.

Best result in the GTE-Am class was a fourth place for the 8 Star Motorsport 458 GT2, with Potolicchio and Aguas driving alongside Davide Rigon, while the Krohn Racing car (Krohn-Jönsson-Mediani) finished sixth ahead of the AF

The premature end to the race meant that only half points were awarded. Ferrari still leads the Constructors’ classification on 193 points, but Aston Martin has now closed up on 188.5, with Porsche third on 176.5. In the GTE-Pro classification, AF Corse in now three points ahead of the first Porsche Mantey car (108 to 105,) while in the Drivers’, Fisichella and Bruni only have six points in hand over the Lieb-Lietz duo. In the teams classification in the GTE-Am class, 8 Star Motorsport is third with Aston Martin pulling away, the gap now being 15 points (93 to 108.) Of the drivers, Aguas-Potolicchio are still third, but they have to make up a 19 point gap to Campbell-Walter and Hall. There are two rounds remaining in the World Championship: on 9 November in Shanghai and on 30 November at Sakhir (Bahrain.) 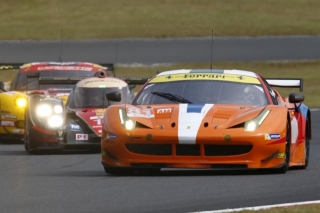 Maranello, 18 October 2013 – This weekend the World Endurance Championship moves onto the circuit of Fuji in Japan for the sixth race of this eight race championship. Ferrari will be represented, as usual, by five cars two in the GTE Pro Category and three in the Amateur class.Leading the charge in the GTE Pro category are Gianmaria Bruni and Giancarlo Fisichella in the AF Corse entered car. The pair are currently top of the drivers points table and AF Corse also lead in the teams standings, all be it on level points with Porsche AG. The second AF Corse pro-car is driven by regulars Kamui Kobayashi and Toni Vilander, who currently stand joint fourth in the drivers’ standings.In the GTE AM category 8 star Motorsport lead the way, currently the team holds third position in the team’s championship and drivers Rui Aguas and Vincent Potolicchio are also third in the drivers’ standings, Davide Rigon takes the third seat for Fuji. Krohn Racing have their regular car driven by team boss Tracy Krohn, Niclas Jonsson and Maurizio Mediani. The GTE AM trio is completed by the AF Corse car for Jack Gerber, Matt Griffin and Marco Cioci.The six hour race starts at 11am local time on Sunday.
Advertising
Recent Posts
Support Mitorosso.com
Archives
Advertising