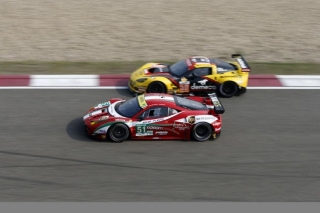 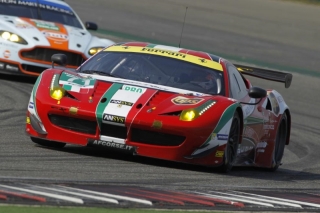 Shanghai, 9 November – It has been a weekend of contrasting emotions for the Ferrari cars entered into the Shanghai Six-Hour race, the penultimate round of the FIA World Endurance Championship season. On the one hand there was disappointment for a result – fourth and fifth places with Bruni-Fisichella and Vilander-Kobayashi respectively – that was far from positive in the GTE-Pro category. On the other hand there was great satisfaction with the success in the GTE-Am class, where the 458 GT2 of the 8Star Motorsport team came out on top in the hands of Enzo Potolicchio, Rui Aguas and Davide Rigon.

In the category reserved for professional drivers, Aston Martin came away with a one-two with Stefan Mücke and Darren Turner finishing ahead of the team made up of Bruno Senna, Pedro Lamy and Richie Stanaway. The two Ferraris didn’t have the pace to fight for the final victory and, what’s more, Bruni and Fisichella both found themselves further slowed down thanks to a problem with a shock absorber. Yet, as bad as it was, the result from Shanghai still leaves everything to play for when it comes to the title race: there are only 5.5 points separating the Italian duo from the Anglo-German team in the drivers’ championship while there is a gap of only 8.5 points to gain back in the teams’ standings and a difference of 17.5 points in the constructors’ championship. In GTE-Am the success by 8Star Motorsport came about thanks to an excellent performance from both drivers and team. Potolicchio and his team took the lead in the fourth hour of the race, as soon as the number 95 Aston Martin in the hands of the Danish trio Thiim-Nygaard-Poulsen was forced to retire. Joining them on the podium were the Porsche of Narac-Vernay-Palttala and the Aston Martin of Campbell-Walter-Stuart-Hall. There were also strong finishes for the other two 458s entered in the race, with the fifth place by Gerber-Griffin-Cioci and the sixth place for Krohn-Jönsson-Mediani. Potolicchio and Aguas are now in third place in the drivers’ championship, nine points behind Campbell-Walter and Hall while Narac and Vernay have a four-point lead over the two Ferrari drivers.

There is still one more race left on the calendar, at Sakhir on November 30: in the Bahrain desert it will be hot – in every sense of the word – because Ferrari will do everything to bring home final glory in the two premium categories of competition for GT cars.