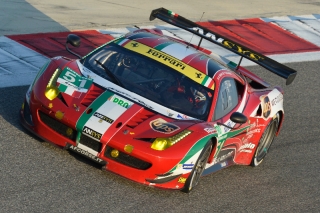 FIA WEC – Excitement in the night 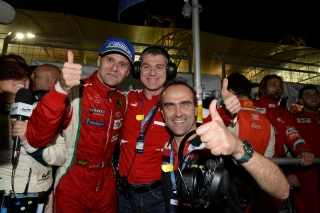 Sakhir, 30 November – There was great delight in the pits after AF Corse won all three titles at Sakhir. The team had prepared down to the smallest detail for the final round of the World Championship, but they went into the race in a realistic state of mind. Overall, the Aston Martin had been quicker over the season, helped by a “balance of performance” that certainly did the 458 GT2 no favours, while Porsche had turned up in Bahrain with an evolution version of their car, already with an eye on next year. The Italian team was banking on its team work, starting with the decision to split the two drivers who were still in with a shot at the title, as putting Bruni in one car and Fisichella in the other would increase the likelihood of a Ferrari driver winning.Clearly now that the title is in the bag, Giancarlo feels some regret, having shared the the cockpit of car number 51 with Gimmi for seven of the eight rounds. However, it does not go unnoticed that the driver from Rome played a decisive role even this evening and throughout the season: he has won the team and constructor titles, but morally, the drivers’ one is also his.

There are two wonderful images that will linger from this amazing day in Sakhir. The first is the parade finish from the two 458 GT2s which reprises those famous ones staged by other Prancing Horse cars at places like Le Mans and Daytona. The other is the kiss Gimmi planted on little Stella, his daughter, in the pits while the race was going through its final heartstopping moments: to see her afterwards on the podium along with Amato Ferrari, Toni Vilander, Kamui Kobayashi and Giancarlo Fisichella was really a beautiful moment. 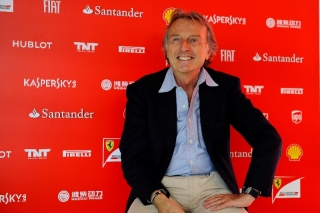 Maranello, 30 November – President Luca di Montezemolo was very pleased to hear about the triumphant performance from the 458 GT2 in the FIA World Endurance Championship. “I am very happy that we have won everything for a second consecutive year,” he told www.ferrari.com. “This result rewards AF Corse’s efforts and consistency and I congratulate them on it. I am also very pleased to see an Italian driver crowned world champion: Bruni has been with us for a long time now and he deserves this victory. The 458 Italia is an amazing car and what it has achieved over the past years on the racing front confirms that fact.” 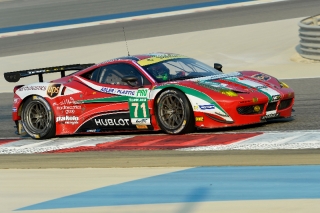 Sakhir, 30 November – It’s been a fantastic Saturday for the Prancing Horse in Sakhir, at the Bahrain Six Hours, the eighth and final round of the FIA World Endurance Championship. Gimmi Bruni, AF Corse and Ferrari took all three titles in the GTE Pro category at the end of a race they dominated pretty much from start to finish. Bruni, once again back with Finland’s Toni Vilander, as a plan to maximise the team’s chances of success, triumphed in the race, fighting off the ever present threat from Porsche, who arrived in Bahrain with a very well developed and competitive car: the 43 second lead over the Bergmeister-Pilet car at the flag is proof of what a great day it was for the 458 GT2. There was also a great third place for the former Formula 1 crew of Giancarlo Fisichella, who played a key role in Bruni’s successes earlier in the year and Kamui Kobayashi, who scored very important points towards the constructors’ and teams’ titles. There were two Maranello cars on the podium, just as there were retirements for the two Aston Martins entered, both stopped with reliability problems, which helped in getting ahead of them in all three classifications.A great day for the 458 GT2 was completed by 8 Star Motorsport taking the team title in the GTE AM category, thanks to a second place for Vincenzo Potolicchio, Rui Aguas and Davide Rigon. Potolicchio and Aguas came so close to taking the drivers’ crown, beaten by a single point by Campbell-Walter and Hall in the Aston Martin. The Sakhir race in this category was won by the other Aston Martin, with the all-Danish crew of Thiim-Nygaard-Poulsen, while on the third step of the podium was the AF Corse crew of Collard-Perrodo-Griffin at the wheel of another 458 GT2.

“This is an amazing result,” commented Antonello Coletta, Head of Ferrari’s Corse Clienti department, who was in Sakhir to support the Prancing Horse teams for this title-decider weekend. “Reliability, work in the pits, car and race preparation, the drivers’ performance and their great ability to work together have been the keys to this success, which confirms that Ferrari is at the top of GT racing on a global scale for a second year running. It was a very difficult season, in which there were times when it looked as though we had little chance of winning. We never gave up, always believing we could do it. Now we can enjoy this victory and, as from Monday, we will turn our attention to next year, aware that, in this category, the competition is very strong and we are ever more determined to stay ahead of it.” 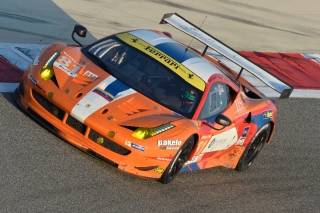 Sakhir, 29 November – The AF Corse 458 GT2s qualified fourth and sixth today for the Bahrain Six Hours, the eighth and final round of the FIA World Endurance Championship. The number 51 car, crewed on this occasion by Gimmi Bruni and Toni Vilander was fourth with an average time of 1.59.049, a bit over two tenths off the Lieb-Lietz Porsche, fastest in 1.58.833.

The two former Formula 1 drivers, Giancarlo Fisichella and Kamui Kobayashi, paired for the first time in this final round of the championship are sixth with an average of 1.59.459.

It was all very close, at least in this session, between the six cars in the hunt for the GTE Pro class title, all of them covered by a bit over six tenths. Therefore it looks like being a fascinating race, even if, obviously, it’s hard to get a clear picture of the true hierarchy down pit lane. What is certain is that AF Corse and its drivers are very determined to give it their all to bring something home at the end of what has been a particularly hard season against really competitive opponents.

Ferrari is closer to pole in the GTE Am class, where the 8 Star Motorsport team’s car, in the hands of Portugal’s Rui Aguas, teamed with Italy’s Davide Rigon, the pair joined on this occasion by Venezuelan gentleman driver Enzo Potoliccchio, was second quickest with a 2.00.337, just a whisker of the best time of 2.00.303, set by the all-Danish crew of Nygaard-Poulsen-Thiim in their Aston Martin. The AF Corse car driven by Griffin-Perrodo-Collard was fourth in 2.00.527. This class also looks like providing a great show tomorrow, with all the titles still up for grabs.

The Six Hours gets underway at 15h00 tomorrow local time and will therefore end under floodlights, as the new lighting system at the Bahrain International Circuit makes its debut, gets its first try out prior to next year’s Formula 1 Bahrain Grand Prix, due to be run at night.

FIA WEC – All to play for in Sakhir 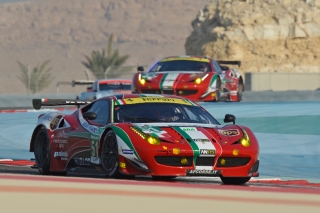 Maranello, 27 November –This weekend, the Sakhir circuit hosts what should be a thrilling finale to the FIA World Endurance Championship. The Bahrain Six Hours will decide the outcome of the GTE Pro and GTE Am world titles. In both classes, Ferrari, AF Corse and its drivers are in the running for victory.In the GTE-Pro class, the drivers Gianmaria Bruni and Giancarlo Fisichella are in second place, 5.5 points down on the Aston Martin duo of Darren Turner and Stefan Mucke. In order to maximise its chances of securing victory, AF Corse has decided to mix up the two driver pairings who have been in the running for the title so far: in Sakir, Gimmi Bruni will be teamed with Toni Vilander, while Giancarlo will race alongside his former Formula 1 colleague, Kamui Kobayashi. If one of the two cars manages to win the final race, then a Ferrari driver will take the world championship crown.

In the GTE Am class, everything is also up for grabs, with the 8 Star Motorsport team entering David Rigon alongside the tried and tested duo of Enzo Potolicchio and Rui Aguas, both currently third but still in the hunt for the drivers’ title, as they have 9 points to make up on the leaders, the duo of Hall-Campbell-Walter. However, a win for the Ferrari trio will be enough to give the win to the team whose technical operation is run by AF Corse, that is 5 points down on Aston Martin Racing. For the final round of the year, the Italian team has entrusted the car to Matt Griffin, Emmanuel Collard and Francois Perrodo.

“I am happy to do my bit to try and take the title for 8 Star Motorsport,” said Rigon. “Winning in Shanghai was fantastic and I find myself really comfortable within the team and with the car: lets hope we can do it!”

To find out how this exciting season turns out, one will have to wait until the six hours chime to end the Sakhir race at 21h00 local time on Saturday.