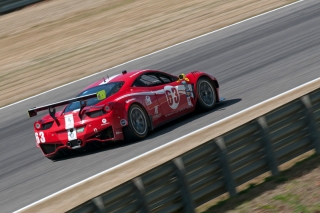 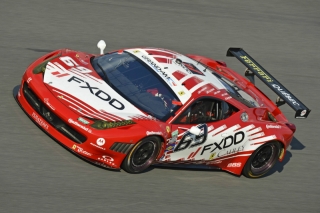 Maranello, 21 April – Highs and lows for the 458 GT on a busy Stars and Stripes Saturday of racing, with two events on the calendar yesterday. At Road Atlanta in Georgia, it was the Grand-Am series and in Long Beach, California, the American Le Mans Series was taking place.At Long Beach the best result was a seventh place for Sweedler-Bell (West/AJR/Boardwalk Ferrari,) while the Risi Competizione car, in the hands of Beretta-Malucelli, finished ninth. The Houston team’s result was largely determined by a stop-and-go plus a minute penalty, handed out by the Stewards after half an hour of racing following a collision with a Viper, when the number 62 458 GT, with Beretta at the wheel at the time, was battling strongly for second place after staging an impressive initial climb up the order. “On a street circuit like this, collisions happen often,” said the Monegasque driver. “At the hairpin, I was hit by another car and that pushed me into the Viper: the Stewards decided to punish me and we have to accept the decision even if it is very hard to take. Then, clearly in such a short race, an 80 second penalty means your race is ruined.” It was a real shame for the Risi Competizione duo, who had every chance of finishing on the podium, in a race that ended with a one-two for BMW ahead of the same Viper involved in the collision in question.Things went a lot better in the Grand-Am event, where the Scuderia Corsa 458, crewed by Westphal-Balzan finished on the third step of the podium, behind the Chevrolet Camaro of Liddell-Edwards and the Porsche of Lindsey-Long. The two AIM Motorsport Racing cars finished sixth and eighth with Papis-Segal and Assentato-Lazzaro respectively. For the team run by Giacomo Mattioli, this was the second consecutive podium finish, coming at the end of a race which the crew led for over half the total distance. After four rounds, Ferrari leads the Constructors classification on 118 points, three more than Porsche, while Scuderia Corsa heads the teams and its driver Balzan is at the top of the Drivers classification.

A racing Saturday in America 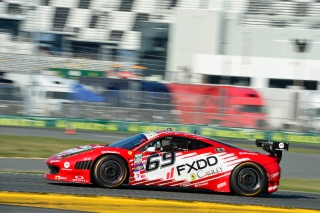 Maranello, 20 April – The 458 GT will have a stars and stripes weekend, as it is involved on two fronts in important events on the American GT racing scene. The Road Atlanta circuit near Braselton (Georgia) hosts the fourth round of the season in the Grand Am series which runs for a duration of two and three quarter hours. There are two teams flying the Ferrari flag in this prestigious series: AIM Motorsport and Scuderia Corsa. Taking to the track for AIM are crews made up of Jeff Segal and Max Papis and Emil Assentato and Anthony Lazzaro. Scuderia Corsa is running car number 63, in the hands of Alessandro Balzan and Jeff Westphal, fresh off the back of a great second place two weeks ago in Birmingham. That result and others secured by the 458 GT, means that Ferrari finds itself in the lead of the Constructors classification on 88 points, five points clear of second placed Porsche.The American Le Mans Series is also back in action for the second round of 2013, following on from the Sebring 12 Hours: this time the race is at Long Beach in California. The famous Risi Competizione team will run a 458, which is entrusted to the safe hands of the driver with the most wins in this series, Olivier Beretta. On this occasion, the Monegasque driver is paired with Italy’s Matteo Malucelli. Second in Sebring, this crew is definitely aiming for a podium finish. There is another car entered by West/AJR/Boardwalk Ferrari, with Sweedler-Bell at the wheel and they will be hoping to make up for the unlucky debut in Sebring, where they were the victim of a spectacular accident.