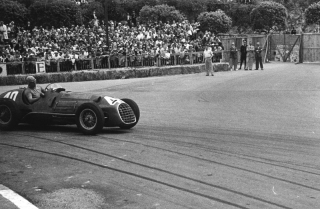 Maranello, 21 May – It all began exactly on this day, the 21st May. Sixty two years ago, on this very same circuit that wends its way through the Principality of Monaco and which this coming Sunday, hosts the sixth round of the 2012 World Championship, Scuderia Ferrari made its debut in the Formula 1 World Championship. There were four Ferraris entered in the race: two 125 F1s, in the GP49 evolution, entrusted to the Italians Alberto Ascari and Luigi Villoresi and two 125 F1s for France’s Raymond Sommer and the British driver Peter Whitehead. At the end of the race, Ascari had managed to finish second behind Fangio’s Alfa Romeo, while Sommer was fourth; Villoresi had to retire on lap 63 while Whitehead had failed to start, because of an engine problem.Many years have passed since then and the Scuderia is the only team to have taken part in every championship at this the sport’s highest level. To date, it has competed in 836 Grands Prix, taken 217 wins, 205 pole positions and 228 fastest race laps. These numbers are all records as are the 16 Constructors’ championships and 15 Drivers’ titles on the Maranello roll of honour: no other team has won more than Ferrari.Today, the Scuderia is making last minute preparations prior to sending off the two F2012 cars to Monaco where, starting on Thursday morning, Felipe Massa and Fernando Alonso will try and add to the tally of 47 podium finishes in this race, albeit only eight of them on the topmost step. The Monegasque event is one of the ones that has gone the longest without seeing a Red victory: the last one dates back to Michael Schumacher’s in 2001. Since then, there has been just one pole, for Massa in 2008 and a lot of podium finishes, the last one being Fernando Alonso’s second place last year. Unusual, given that no less than six times (2002 Barrichello, from 2004 to 2006 Schumacher, 2008 Raikkonen and 2009 Massa) a Ferrari has set the fastest race lap.It will be tough to break that negative tradition this weekend, but one thing is certain, nothing will be left to chance because, as Chairman Montezemolo stated today in a letter addressed to all the Scuderia staff, “Winning the Championship depends only and exclusively on ourselves, on our desire to show we are the best.”