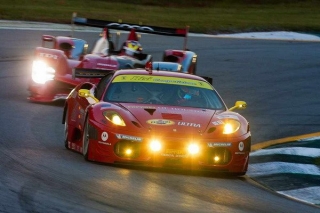 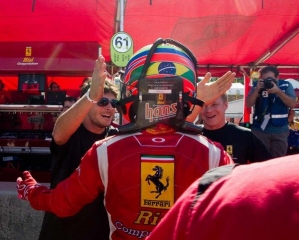 Maranello, 3 October 2010 – The twelfth year of the prestigious American Le Mans Series came to an end at the Road Atlanta circuit in the United States, with a race lasting just over nine hours. The GT2 class win went down to the very last corner, with the Corvette ZR1 of Oliver Gavin, Jan Magnussen and Emmanuel Collard emerging victorious, ahead of the Ferrari entered by Extreme Speed Motorsports, driven by Scott Sharp, Johannes van Overbeek and Dominik Farnabacher. In third place was one of the two Risi Competizione F430s, crewed by Gianmaria Bruni and Toni Vilander. The duo staged a fantastic climb back up the order after being penalised for a collision in the early stages, then losing the lead in the classification when they ran out of fuel with only ten laps remaining. This meant their hopes of taking the championship evaporated, with the title going to Patrick Long who finished down in fifth at the wheel of the Flying Lizard Porsche 911. The other F430 entered by the Houston Ferrari dealership completed 353 laps, or around 1431 kilometres on its way to seventh in class, in the hands of Jaime Melo, Giancarlo Fisichella and Mika Salo. After the previous round at Silverstone and this Petit Le Mans race, the Ferrari men move on to tackle the third round of the Intercontinental Le Mans Cup, a 1000 kilometre race at China’s Zhuhai circuit over the weekend of 7 November. 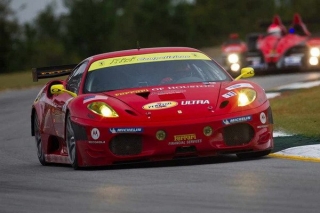 Maranello, 2 October 2010 – The F430 of Jaime Melo, Giancarlo Fisichella and Mika Salo took pole for the thirteenth edition of the Petit Le Mans, the famous 1000 mile race held at the Road Atlanta circuit, in Braselton, Giorgia. Ferrari took a clean sweep of the top four places on the grid in the GT2 class in yesterday’s qualifying at the American track: behind the F430 which its Brazilian driver took to pole in 1.19.889, came the other Risi Competizione Ferrari, in the hands of Gianmaria Bruni and Toni Vilander (1.20.070) while third and fourth places went to the Extreme Speed Motorsports cars of Guy Cosmo, Ed Brown, Joao Barbosa (1.20.165) and Johannes Van Overbeek, Dominik Farnbacher, Scott Sharp (1.20.185.) The race gets underway at 11.20 local time, covering a distance of 394 laps, or around 1600 kilometres, with a maximum time limit of ten hours.