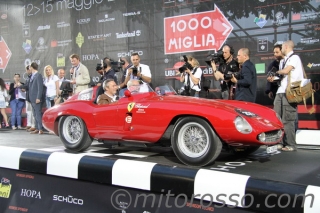 Concentration, enthusiasm, and determination. This is what it took for Giordano Mozzi and Stefania Biacca—an inseparable couple both in marriage and in racing—to drive to victory in the Mille Miglia on board a splendid 1933 Aston Martin Le Mans. They came in eleventh in 2009, and fourth in 2010, but this year they were victorious. Their success was built trial by trial, point by point, in a highly suspenseful race which saw the three top contenders battling it out kilometer after kilometer on the final leg to Brescia.

The winning car from Mantua beat another family crew, this time father and son, Bruno and Carlo Ferrari, who raced in a 1927 Bugatti Type 37 . While an Argentine duo, Claudio Scalise and Daniel Claramunt, came in third in a 1933 Alfa Romeo 6C 1500 GS.

The Mozzi-Biacca couple received a double award: the Mille Miglia Cup, which immortalizes all the past races of the “Freccia Rossa” (the Mille Miglia’s red arrow road sign) and the trophy, Trofeo Ubi Banco di Brescia, which was given to them by the bank’s president, Franco Polotti, at the award ceremony this morning at the theatre, Teatro Grande di Brescia.

“How incredibly emotional this all has been,” exclaims Mozzi, “we still can’t believe it! But now seeing the theatre brimming with well-wishers, we are starting to understand that it really is true. It was quite a battle, at every trial neck to neck with the other two top-ranking competitors. The last trial was really decisive. That’s what got us our victory.”

At the Awards Ceremony, the Italian Minister for Education, Maria Stella Gelmini, called the Mille Miglia, “an event that breaks records in terms of participants and public”. The race, in her words, “makes you relive the fascination of classic cars of past eras. But it is an event which also looks to the future with Italy always as its leading character.”

Pleased with the results of the event was the President of the Organizing Committee of the Mille Miglia, Alessandro Casali, who spoke at the ceremony, stating that “this was a race worthy of the Guinness Book of World Records. The numbers of spectators and Mille Miglia appassionati along the 1,600 kilometers of the route were just amazing. It was truly moving to see the warmth of the Italians, and so many foreigners who came here expressly to see this, the world’s greatest road race. It makes me ever more convinced of the value of the Mille Miglia,” Casali concluded, “the race is an engine for tourism and an instrument for promoting the excellences of Made in Italy to the world.”

Underlining the sports success of the historic revival, the Secretary General of the Organizing Committee of the Mille Miglia, Sandro Binelli, explained, “This year’s race brought out the preparation, rigor, and the great strength in competition that the crews have from the first leg on. The three top-ranked crews kept alternating in first place. And adding to my great satisfaction with regards to the Mille Miglia 2011, “Binelli continued, “is the fact that we had the official participation of nine car-makers. The tremendous effort they made, was a major contribution to the success and prestige of the world’s greatest road race.”

Just as in years past, a special award was given to the highest-ranking all-ladies crew. Raising the Coppa delle Dame 2011 cup proudly up high this year were Francesca Grimaldi and Laura Confalonieri, who faced the Brescia-Roma-Brescia challenge in a 1956 Porsche 356 A Speedster 1600.

A new feature this year was the first “Stefano Ricci Gentleman Drivers Trophy”, which was won by the Colangelo-Palladino duo, who raced in car number 121. “I am pleased,”said
Stefano Ricci, as he gave out the prize on the podium at the finish line in Brescia, “that the jury awarded the crew from the Firemen of Italy. Driving their car in their historic firefighters’ uniform was the perfect interpretation of the spirit in which this trophy is bestowed.”

The next rendezvous for an extraordinary adventure will be at the Mille Miglia 2012. Just follow the red road sign arrows, the Freccia Rossa.

The Mille Miglia is Revving Up Its Engines

On May 12 the “world’s greatest road race” is off: 375 classic cars challenge each other on the historic Brescia-Rome-Brescia route.

The Mille Miglia, the most spectacular car event on Earth, is at the starting line. This year’s “world’s greatest road race”, as Enzo Ferrari called it, will be back on the roads of Italy from May 12 to 14, 84 years after its inception. Along the historic route from Brescia to Rome and back, 375 cars— selected from over 1,400 requests—built between 1927 and 1957 will challenge each other and themselves. They will cross 7 regions of Italy, 177 towns, and 1 foreign state (San Marino) passing through some of the most picturesque areas of the Italian landscape.

“We are on the eve of the world’s greatest road race,” declared Alessandro Casali, President of the Organizing Committee of the Mille Miglia, “and the auspices are great, with the top level of the Italian government taking part—starting from the President of the Republic, Giorgio Napolitano, who wished to show his support for the Mille Miglia by donating his trophy to the race. Several other Ministers and their departments are also enthusiastically showing their support.”

The suspense builds up from the celebrated Sealing Ceremony in Piazza della Loggia to the actual start of the race, set for May 12 from Viale Venezia in Brescia, to be officially given by the godmother of this year’s Mille Miglia, Madalina Ghenea. The cars will cross the characteristic and historic old centers of approximately 147 towns, including Modena where the cars will parade past the birthplace of Enzo Ferrari, now a museum. Next will come Bologna, Spoleto, Siena, and Florence, reaching Rome with the Pope’s castle, the splendid Castel Sant’Angelo, as background, to then return to Brescia on May 14.

“The Mille Miglia this year represents an extraordinary number of brands and top quality cars,” affirms Sandro Binelli, Secretary General of the Organizing Committee of the Mille Miglia. “52 car brands will take part in the race, of which an amazing 55 cars have actually participated in the historic Mille Miglia speed race of the past. We also have important partners at our side again, like prestigious watchmaker, Chopard, the World Sponsor of the Mille Miglia, and the 9 carmaker sponsors, each of which has contributed to the history of the race in the past. Their presence enables the Mille Miglia appassionati—along with the general public, and the drivers in this year’s event—to relive the great emotions of the legendary speed race.”
This year as well, following on their incredible success last year, the spectacular Ferrari Tribute to the Mille Miglia will be back with 130 splendid Ferraris, both classic and modern, which are to come down the road just before the cars in the race.

Among the many new features in 2011, will be the first Mille Miglia Auction (on May 11), organized by the Lankes Auction House of Germany. The auction will be held for the next two successive years on the eve of the start of the race. It will allow collectors, participants, and appassionati to gather at the Fiera di Brescia trade fairgrounds, to take part in the auctioning of 20 prestigious classic cars and prestigious automobile memorabilia.

Another exciting new feature is the Mille Miglia Tribute North America which will take place from August 14 to 17, 2011. The Tribute is designed to bring the emotions of the race to a picturesque route that is characteristic of America’s west coast. The event is open to cars with special historic value built between 1927 and 1957, with privilege given to cars which have already raced in the historic Mille Miglia speed race. This event will open the American historical car season. Though this will be the first time a Mille Miglia tribute is held in America, it is already generating a great amount of interest from American car fans.

In the Mille Miglia sports, class, and style characterize not just the splendid cars in the race, but also the 375 drivers and co-drivers. The race this year will launch a competition which pits the style and elegance of the crews in parallel with that of the cars. The “Stefano Ricci Gentlemen Drivers Trophy” will award style in clothing, accessories, and driver’s style. “Each classic car represents a precise moment in society,” explained Stefano Ricci, “just as fashions do. We want to award the crew that best interprets its clothing to match its car.”
This year as well, UBI Banco di Brescia is Title Sponsor of the Mille Miglia, along with World Sponsor, Chopard, and Sixt and Stefano Ricci as Main Sponsors. The event will be held in partnership with the nine Joint Presenting Sponsors: Alfa Romeo, Mercedes-Benz, BMW, Jaguar, Bugatti, Porsche, Volkswagen, Audi, and Bentley. Official Sponsors: A2A, ENI, Hopa and Schüco; Business Sponsors: Fred Mello, GMH, Grana Padano and State of Art, and Timberland. The Mille Miglia is proud of its collaboration with Acea, and is supported by Technical Sponsors: Acqua di Parma, Alitalia, Fiera di Brescia, Loqus, Siglacoma and Terra-S. In addition to Media Partners, Ansa and RDS (Radio Dimensione Suono,) are the Premium Sponsors: Foresti, Rubinetterie Bresciane, Starwood and Tenute La Montina, and Institutional Partner, Brescia Mobilità.

The Mille Miglia is under the patronage of, among others, the President of Italy’s Council of Ministers, and the Ministries for Foreign Affairs, for Economic Development, for the Environment, and for the Cultural Heritage and Activities, for Agricultural Policies, for Tourism, and for Youth.