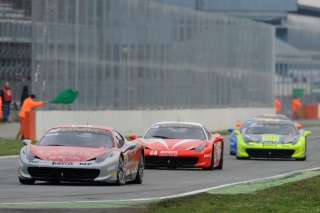 Monza, 7 April –The European series of the Ferrari Challenge Trofeo Pirelli got off to a start this weekend at Monza, with the first round of the season. Despite the changeable weather, fans turned out in force to watch the interesting race programme. It was great to see Giorgio Raffaeli in the paddock, the Kessel Racing driver who last year suffered a serious accident at Silverstone. Today featured the final legs in the two classes, with some really hard racing all the way to the flag in the two 30 minute sprint events. In the Trofeo Pirelli category, the win went again to Lorenzo Casè (Forza Service), who followed up a strong performance in Saturday’s race with the win today that saw him lead home the winner of Coppa Giovani Stefano Gai (Rossocorsa) and Sergey Chukanov (Team Ukraine). Of the Coppa Shell drivers, David Gostner (Ineco/MP) ended on the top step of the podium, beating Vincenzo Sauto (Rossocorsa/Pellin) at the line. He had to settle for the runner up slot and the Coppa Gentleman award, while the battle for third ended in favour of Fons Scheltema (Kessel Racing) who beat his team mate Massimiliano Bianchi to the chequered flag. The second round of the European series of the Ferrari Challenge Trofeo Pirelli takes place at the Brno Circuit in the Czech Republic over the weekend of 19th May. 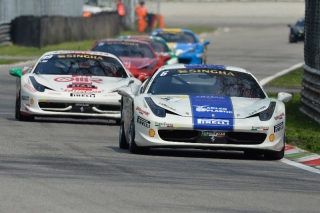 Monza, 6 April –Today, the Monza circuit was the backdrop to the first races of this season’s Ferrari Challenge Trofeo Pirelli, with over forty competitors on track, on a day when variable weather had a little break on-track action.

The 458 Challenge car was up to the task, confirming its high performance credentials. Over the past two seasons it has already justified its choice as the car to bring Ferrari’s one-make series to life, raising the level of competition in the championship, both in Europe and around the world. Monza is the first of the rounds on Italian soil, the other being at Imola on 29 September. It promises to be a very interesting season with some rounds running on the same card as prestigious races such as the Le Mans 24 Hours (19-22 June.) The series also returns to Hockenheim after a four year break, where it will feature as part of the European Ferrari Racing Days, together with the decision on the venue for celebrating the end of the 2013 racing season with its fans at the Mugello track (Finali Mondiali 7-10 November).

The afternoon then featured the first two races, each lasting 30 minutes. Victory in the Trofeo Pirelli went to Lorenzo Casè, followed past the flag by Stefano Gai and Daniel Mancinelli. Coming out best of the Coppa Shell runners was Dirk Adamski (Autohaus Saggio), winner of the “Over 50s” in the Coppa Gentleman, with Andrii Lebed (Team Ukraine) and David Gostner (Ineco/MP) taking second and third places. Of the “Under 30s” competing for the Coppa Giovani top honor went to Stefano Gai.

Tomorrow features the last two races at 10.00 (Trofeo Pirelli) and 14.30 (Coppa Shell,) both shown live on SKY Sport in Italy, with replays during the week, while 60 other countries will also broadcast coverage of the event. 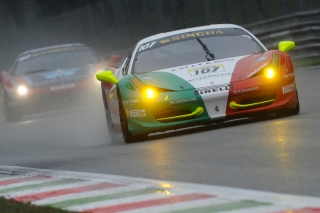 Gai and Bianchi take the first poles of the season

Monza, 5 April –As tradition demands, once again this year, the Monza circuit hosts the opening round of what is the twenty first season for the European Ferrari Challenge Trofeo Pirelli. Over forty drivers are entered, a testament to the success of a formula that provides excitement for participants and spectators alike. The format has been updated this year, raising the series’ level of competition still further, introducing a handicap, where the top three in each of the two races take a grid penalty after the two qualifying sessions for the following event. The European series continues to highlight the performance of the younger drivers, Under 30 years of age in the Trofeo Pirelli only, who get to compete for the Coppa Giovani. At the other end of the spectrum, there is a Coppa Gentleman for the over 55s.

The racing, starting from this opening round, looks like being very interesting with a mix of new competitors and old faces returning. Moving up to the Trofeo Pirelli are Raffaele Giannoni (Motor/Piacenza,) Daniele Di Amato (CDP) and Giacomo Stratta (Forza Service,) great competitors from last year’s Coppa Shell. Among the new entry, we have Daniel Mancinelli, entered by Motor/Piacenza to go up against the Ukraina team’s line-up of Tamrazov and Chukanov, the budding faces of the championship. Philipp Baron is a major name making a come-back, the Austrian having won the title in 2010 and then running strongly the following year. Now, the experienced racer is at the wheel of a Ferrari entered by newcomers Octane 126. The Coppa Shell looks like being very closely contested, with over 30 entries from 15 countries, with some real veterans on the entry list, including Vincenzo Sauto (Rossocorsa/Pellin) and Erich Prinoth (Ineco/MP,) as well as Giosuè Rizzuto and Mario La Barbera, these two habituees of the Ferrari Challenge racing for Motor/Malucelli this year.

The European track action got underway today with the first two qualifying sessions, lasting thirty minutes each, to decide the grids for the first races on Saturday. In the Trofeo Pirelli, quickest in the first session was Stefano Gai (2.06.031). Starting alongside the Rossocorsa driver on the front tomorrow will be Lorenzo Casè (2.06.221), entered by Forza, followed by Philipp Baron (Octane 126-2.06.272). As for the Coppa Shell, the best time in the first session was set by Massimiliano Bianchi (Kessel Racing), who finished the session with a lap in 2.08.406, followed by Erich Prinoth (2.09.281) and David Gostner (2.09.359), both entered by Ineco/MP. The action continues tomorrow with the last two qualifying sessions at 10.20 (Race 1-Trofeo Pirelli) and 11.45 (Race 1-Coppa Shell.) Then come the first two races at 15.05 (Trofeo Pirelli) and 17.50 (Coppa Shell) which will be shown live on SKY Sport in Italy, with repeats throughout the week, while the racing will also be broadcast in sixty other counties.