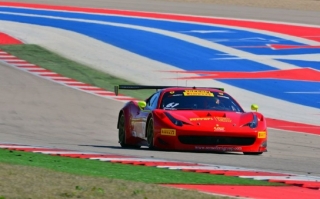 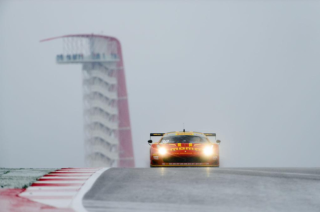 Austin, 9 March –The second race at Austin in the Pirelli World Challenge was run in the wet and didn’t bring much joy to the Ferrari customer teams, apart from one podium in the GTA category. Oliver Beretta, winner of race 1 on Saturday, nevertheless leaves Texas lying third in the championship, a handful of points off the leader, Austria’s Kevin Estre and second placed Ryan Dalziel from the USA.

Rolling start. Torrential rain at the Circuit of the Americas compelled the Race Director to call for a rolling start, rather than have the cars leave the grid from a standstill. Kevin Estre produced a brave getaway, cleverly running down the outside of the uphill Turn 1. This put him in the lead ahead of Nick Catsburg (Lamborghini,) Johnny O’Connell (Cadillac) and Ryan Dalziel.
Further back, Olivier Beretta was struggling in the wet in the R. Ferri number 61 Ferrari 458 and dropped a place, crossing the line at the end of the opening lap in seventh place. He was behind Madison Snow who had made a great getaway in the Audi from eleventh. On lap 3, the race was neutralised because of an accident and, at the restart, Estre made the decisive dash to secure the victory. Behind the leader, O’Connell was losing ground and was passed by Dalziel, who thus took a second consecutive runner-up spot. Then came Catsburg, Mike Skeen (Audi,) Ryan Eversley, who did very well to move up from 25th in the Honda and Snow, just ahead of eighth placed Beretta. Mike Hedlund was 14th in the 65 car of Scuderia Corsa, while the same team’s 64 car, driven by Duncan Ende was only 26th.

GTA. Things went better in the GTA Class, with Ricardo Perez, having started seventh in the Risi Competizione 62 car, fighting for victory with the winner of the first race, Porsche’s Michael Lewis.
The Mexican then lost ground and was passed by fellow Ferrari driver Henrique Cisneros in the NGT Motorsport number 30 car, the Dane Christan Niesen (Aston Martin) and another 458 Italia the number 07 car of Mexico’s Martin Fuentes who was fourth.

Classification. Thanks to a fourth place in the first race and victory in the second, Estre leads the classification on 230 points, 6 more than Dalziel and 21 more than Beretta. In the GTA Class, Michael Lewis obviously leads, on 144 points, from Cisneros on 108 and Frank Montecalvo and Ricardo Perez tied on 103. The next round takes place at Saint Petersburg, Florida, at the end of the month.

Pirelli World Challenge – Beretta kicks off with a win 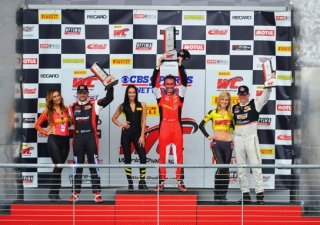 Austin, 8 March – Ferrari’s start to the Pirelli World Challenge season could not have got off to a better start. Olivier Beretta claimed victory in the inaugural race at the Austin circuit in the R. Ferri entered number 61 458 Italia. There was also a third place in the GTA category, aimed more at the amateur racer.

The start. The race built up to a crescendo over its 23 laps. At the start, poleman Nick Catsburg held firm in the Lamborghini, while Kevin Estre was slow off the mark in the McLaren and was passed by Ryan Dalziel’s Porsche and Olivier Beretta, who went past at turn 1 to go up to third. On lap 2, Catsburg led from Dalziel and Beretta, but the stewards gave the Dutchman, who was leading, a drive-through penalty for going over the track limits, which promoted Dalziel and Beretta to first and second respectively. Third was now the 2014 champion, Johnny O’Connel in the Cadillac, from eighth on the grid.

Tight duel. The fight for the lead was down to just Dalziel and Beretta, who were glued together from laps 13 to 21, with the Monegasque driver waiting for his rival to make a mistake in order to take the lead. However, the American didn’t put a foot wrong, so Beretta had to take matters in hand. He produced an amazing performance on lap 21 to sit on the Porsche’s gearbox and on the main straight, he pulled off a text book passing move, which saw him take the lead at the first uphill turn at the Circuit of the Americas. Dalziel tried to counterattack but to no avail, as lap 22 saw Beretta run at qualifying pace, giving the Porsche no chance.

A job well done. Beretta was thus first across the line, much to the delight of team owner, Remo Ferri and all the guys involved in preparing the number 61 car. He also took the “Move of the Day” award, for the best overtaking manoeuvre. “The race went well right from the end of the first lap and the car was perfectly set-up,” said Beretta afterwards. “So I want to thank the guys in the team for that as they did a great job. I waited for my rival to make a wrong move for quite a while, but he was driving very well. So, when it was clear the end of the race was approaching, I decided to push. I did practically two qualifying laps. In the first one I closed on Dalziel and passed him and on the second, I pulled out enough of a gap to be sure of the win in the closing stages.”

GTA Podium. Apart from Beretta’s win, Ferrari also had a third place to celebrate in the GTA class. Rookie Ricardo Perez, winner of the 2014 Ferrari Challenge North America and Trofeo Pirelli Am world champion at the Abu Dhabi Finali Mondiali, drove a great debut race. He was beaten only by Michael Lewis, fifth overall in a Porsche and Frank Montecalvo in a Mercedes (seventh,) both of them more experienced than him in the Pirelli World Challenge.The Mexican, driving for Risi Competizione was eighth overall at the flag and can now look ahead to the forthcoming rounds with great confidence. Behind him came another Ferrari 458 Italia, the number 07 car of Scuderia Corsa, in the hands of fellow countryman Martin Fuentes, who finished ahead of the number 30 car of NGT Motorsport, driven by Venezuela’s Henrique Cisneros.

The second race of the weekend takes place today and can be seen on www.world-challenge.com and www.torque.tv at 19.50 CET.

Maranello 6 March – This weekend, Austin hosts the first appointment of the 12 round Pirelli World Challenge championship, which will see various Ferrari customer teams in action. Taking part in the Circuit of the Americas weekend are six 458 Italias, split equally between the two categories: GT, the main one, and GTA, aimed mainly at the amateur driver.
GT Class. In the main category, the best known name in Austin is that of the Monegasque driver Olivier Beretta, who races the number 61 car entered by the R. Ferri Motorsport team. Olivier is one of the most successful GT racers of all time and is bound to be an absolute front runner in the two races at the Circuit of the Americas. The other two cars are entered by Scuderia Corsa, which has entrusted the 64 car to the American Duncan Ende and the number 65 machine to fellow countryman, Mike Hedlund, who won five races last year at the wheel of the DragonSpeed 458 Italia. The man to beat will be American Johnny O’Connell, who like last year, will be running a factory Cadillac.
GTA Class. In this category, the stand-out team is Risi Competizione, who have chosen a driver well known to the Prancing Horse fraternity, as the Ferrari Challenge North America champion, Ricardo Perez, will be at the wheel of car 62. The Mexican is making his debut in this category and will divide his time between this series and the one-make championship. The NGT Motorsport number 30 car has Venezuela’s Henrique Cisneros at the wheel, while the third Ferrari in this category is also driven by a Mexican, Martin Fuentes, who drives Scuderia Corsa’s 07 car. The top favourite here must be Sweden’s Henrik Hedman, who came second last year and this year drives a DragonSpeed Mercedes. There will be one race on Saturday and another on Sunday.