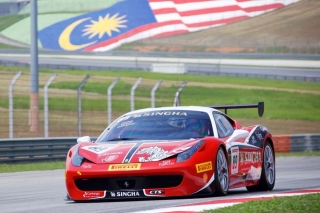 15th March 2015 – The first round of the Asia Pacific Ferrari Challenge ended today at the Sepang International Circuit in Malaysia under scorching hot weather conditions. The 21 drivers in the field once again showcased pure driving exhilaration during Race 2 with interesting overtaking maneuvers and fierce battle.

Following his win yesterday, polesitter Steve Wyatt from Australia once again stood proudly on top of the podium steps, winning first overall and in his Trofeo Pirelli class. He beat his nearest competitor by 13.62 seconds. In second position was Indonesian David Tjiptobiantoro, who moved up to the higher classification from Coppa Shell this year. Following in third place was Renaldi Hutasoit, also from Indonesia.

In the Pirelli AM class, it was a really tight call among the top three contenders, featuring a three way fight between Xu Wei from China, Ziad Ghandour from Lebanon and Voravud Bhirombhakdi from Thailand. Xu eventually emerged the victor, followed by Ghandour who finished second and was just 0.865 seconds behind the leader, and Bhirombhakdi in third position.

Xing Yan Bing from China was all smiles as he finished on top of the podium today, taking victory in the Coppa Shell class. He commented during the press conference that since joining the Asia Pacific race in 2011 and being the first Chinese to do so, he was extremely proud to finally win the Coppa Shell class. Fellow compatriot Jin Xin took the lead at the start of the race. However, Xing was able to overtake halfway through the race and made it to the top of the podium. Ken Seto from Japan settled for a third place finish.

This is only the first round of the season and there is still a long way to go. Many drivers will be looking to have their say in the title fight in the coming races. The next round of the Asia Pacific Ferrari Challenge Trofeo Pirelli will take place on April 24 – 26 in Fuji, Japan. 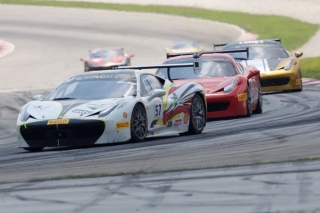 14th March, 2015 – The first of two races of the 1st round of the Ferrari Challenge Asia Pacific took place today under bright and sunny skies at Sepang International Circuit with lots of thrilling action.

Dominating the first round of the Trofeo Pirelli class was Steve Wyatt from Australia, who finished in an impressive racing time of 36:26.774. Starting in pole position, Wyatt held strong throughout the race, scoring the fastest race lap time of 2:14.889 and increasing his distance in front of Philippe Prette from Hong Kong who finished second. Finishing third was Renaldi Hutasoit from Indonesia.

In the Pirelli AM class, the winner was Ziad Ghandour from Lebanon who finished the race in 36:44.601, 17.827 seconds behind overall leader Wyatt. Coming in second for this class was Voravud Bhirombhakdi from Thailand, followed by Xu Wei of China.

In the Coppa Shell classification, Jin Xin from China was the clear victor and kept his lead all the way to the chequered flag. The other two podium positions went to Ken Seto and Tadakazu Kojima, both from Japan.

Track action continues tomorrow for Race 2 of the Ferrari Challenge weekend at Sepang International Circuit. This will take place at 2.00PM local time. 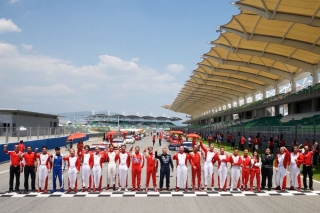 Sepang, 13th March – The 2015 Ferrari Challenge Asia-Pacific season gets underway at Sepang International Circuit, Malaysia, from 14th – 15th March. Ferrari Challenge Trofeo Pirelli is now into its twenty-third year, which features the 458 Challenge EVO, the 8 cylinder car derived from the 458 Italia and the fifth model to be used in the series that see both experienced drivers and gentleman racers on track in two categories – the Trofeo Pirelli for the former and Coppa Shell for the latter. It is run in three championships – Europe, Asia Pacific and North America.

The first round of the Asia Pacific Ferrari Challenge Trofeo Pirelli, which is into its fifth year, opens tomorrow as cars take to the track today for free practice before returning on Saturday for the first qualifying sessions and the first race, with a further qualifying and second race on Sunday.

With a length of 5.543 km, the Sepang track features 15 turns and 8 straights with access speeds of more than 300km/h. The track allows ample opportunities for overtaking, to ensure a race full of suspense and thrill. A total of 22 drivers will get behind the wheel of the 458 Challenge EVO this weekend.

The calendar for the Asia Pacific series is made up of six rounds, travelling to renowned racetracks including those at Fuji at the end of April, Shanghai in May, Zhuhai in June and for the first time in Sentul, Indonesia in August, before returning to Sepang again at the end of August and will conclude in December with the traditional Finali Mondiali.

The Challenge drivers will undertake two rounds of practice sessions today, with the first race tomorrow at 2:35 PM local time (7:35 CET) and the second race on Sunday at 2:00 PM local time (7 CET).