Mugello 12 Hours – Ferrari quick but just off the podium 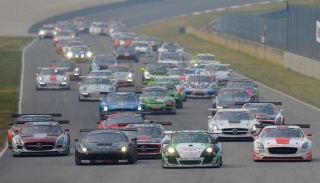 Scarperia, 14 March – Ferrari was quick, but just off the podium on its home track of Mugello in the 12 Hour race, which ended at sunset. The Team Black Pearl Racing by Rinaldi 458 Italia, driven by the Germans, Alexander Volz, Steve Parrow and Pierre Kaffer, led the race and set the fastest lap with Kaffer in 1’49”361, but in the end they had to settle for fourth place.

Unlucky number 4. Not much luck for the other 458 Italia entered, the number 4 car of Scuderia Praha, in the hands of Jiri Pisarik, Jaromir Jirik and Matteo Malucelli, which had to retire at two thirds distance.

Next stop Zandvoort. The win went to the HB Racing Team Herberth Porsche, driven by the Swiss Daniel Allemann and the Germans, Ralf Bohn and Robert and Alfred Renauer. Second was the Ram Racing Mercedes, with the British crew of Tom Onslow-Cole, Adam Christodoulou and Paul White. The last step on the podium belonged to the Hofor Racing team’s sister car in the hands of Switzerland’s Roland Eggimann, Michael and Chantal Kroll, the Dutchman Christiaan Frankenhout and Germany’s Kenneth Heyer. The next round is another 12 Hour race at Zandvoort on 29 and 30 May.

12 Hours of Mugello – Two Ferrari teams on the track 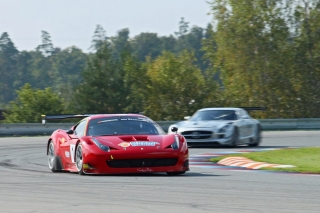 Scarperia, 12 March – Tomorrow and Saturday will see the running of the 12 Hours of Mugello, a race from the 24H Series calendar which had its first round with the 24 Hours of Dubai. The programme features qualifying tomorrow at 11.00 before the start of the first part of the race at 13.30. The first stint will go on for four hours, then it will be halted at 17.30 before resuming on Saturday at 9.30. The end of the race is again scheduled for 17.30 after the remaining eight hours of running.

The two teams. There will be two 458 Italia cars in action at the Ferrari-owned circuit. Driving the car number 4 of the Scuderia Praha will be the Czech duo of Jiri Pisarik and Jaromir Jirik, who will join forces with the experienced Italian Matteo Malucelli. Driving the car number 66 of the Black Pearl Racing by Rinaldi team will be a German trio made up of Steve Parrow, Alexander Volz and Pierre Kaffer, who usually partners Giancarlo Fisichella in the United SportsCar Championship (USCC) in America.

Great tradition. Needless to say the Mugello track is rich in tradition for Ferrari, who won last year’s 12 Hours thanks to the AF Corse team. In fact there have been a total of 62 victories taken by Ferrari at Mugello between 1981 and 2014. The first, in 1981, came in the 6 Hours – which counted towards the World Championship for Makes – thanks to Giovanni Del Buono and Odoardo Govoni who took victory in the IMSA GTX category. In the history of Ferrari there have also been five wins on the Mugello Grand Prix, a back-breaking marathon around the Apennines on a non-permanent track that was 66km long. The first win came in 1955, the last in 1966.