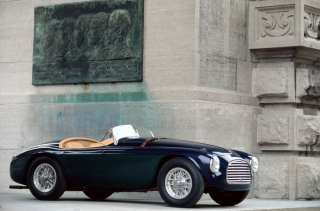 Maranello, 26 May – A Ferrari dominated the 2015 Villa d’Este Concours d’Elegance. The 1950 166 MM in question has a highly unusual history. Its first owner was none other than Gianni Agnelli who took delivery in July 1950 and sold it two years later to Belgian Viscount Gery d’Hendecourt. The latter subsequently passed it on to the Garage Francorchamps. Having changed its livery to blue, that team launched its competitive career. In the hands of Le Mans hero Olivier Gendebien, the 166 MM won the Coupe du Spa-Francorchamps and the Grand Prix de Spa. In 1957, it changed hands once again, this time going to Armand and Jean Blaton. Driven by “Beurlys” (Jean), it won further races in Belgium and Denmark.

On show. The car was then owned for many years by former Belgian former Formula 1 driver Jacques Swaters who took it to classic car exhibitions for the first time as well as restagings of the Mille Miglia and other great races of the past. In 1994, the 166 MM was also shown at the MoMA in New York and then later at the Nationalgallerie in Berlin as an example of Italian car design excellence. In 2012, it was purchased by Englishman Clive Beecham who had its bodywork returned to its original condition to obtain certification by the Ferrari Classiche department.

The auction at Villa Erba. On the same weekend, Villa Erba also played host to the RM-Sotheby’s auction at which Ferraris made a total of 18.5 million euro. The car that achieved the highest sale price was the 1952 212 Export Barchetta, winner of several races first in Sicily and later in Switzerland, which changed hands for 6.72 million euro. Other very impressive prices were achieved by a 1963 250 GT/L Berlinetta Lusso (2 million euro) and a 1960 250 GT Cabriolet Series II (1.5 milioni). Even much new Prancing Horse models attracted excellent bids, particularly a 1985 288 GTO which made just under 2 million and a 2002 Enzo which sold for 1.26 million euro. 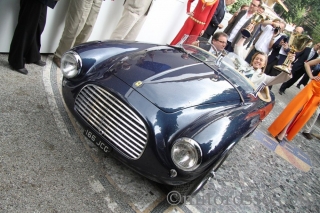 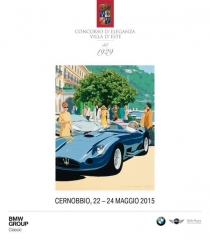 The rare vehicles that make up the field of entrants for the Concorso d’Eleganza Villa d’Este are often revered as “works of art on wheels”. This year, visitors to the beauty contest for historic cars and motorcycles hosted by BMW Group Classic and the Grand Hotel Villa d’Este will be reminded of how, 40 years ago, this description took on a whole new meaning. In June 1975 a BMW 3.0 CSL painted by US artist Alexander Calder raced in the 24 Hours of Le Mans. This was the car that launched the Art Car tradition initiated by BMW and today remains a fascinating representative of a dazzling era – one in which sensational art and exclusive lifestyle also swept up the automotive world. At the Concorso d’Eleganza Villa d’Este 2015 the glitz and glamour of the 1970s will roar back to life. “Seventies style – the jetset is back” is the motto of the Classic Weekend on Lake Como, which will bring together owners and aficionados of classic cars and motorcycles in this wonderfully exclusive setting from 22 – 24 May 2015. The Concorso di Motociclette will take its place in the programme for the fifth time, alongside other highlights including a look back at “90 years of the Rolls-Royce Phantom”.

Taking centre stage once again this year at the three-day event held in the grounds of Villa Erba in Cernobbio is the beauty contest, in which historic cars and motorcycles of outstanding class and with a fascinating past will do battle in a number of competition categories. On the occasion of the model’s 90th anniversary, Rolls-Royce Phantoms from various decades will also be competing in a special class for the favour of the jury and thus the coveted Concorso d’Eleganza Villa d’Este trophies. As well as seeking approval from the experts, contestants will by vying for the affections of the public as well, with their votes determining the winners of several special prizes.

An exquisite line-up of models also awaits fans of classic motorcycles. The Concorso di Motociclette has established itself as one of the highlights of Day 2. As last year, the convoy of rare motorcycles will pause at the Historic Car Parade at Villa d’Este on its way from Como to the parkland of Villa Erba in Cernobbio. The jury will then cast their expert eye over the assembled motorcycles once they have reached the end of their journey.

The support programme for the visitors, entrants and guests of honour will also be held in the style of the uproarious seventies. The traditional celebration of beauty on two and four wheels begins with a scene-setting open-air event on Friday evening. The grounds of Villa Erba will also be open to the public on Saturday and Sunday. This year’s special exhibition in the rotunda at Villa Erba is devoted to the Art Cars which captured the imagination of art and motor racing fans alike in the 1970s. This decade alone produced four powerfully-engined works of art, with Frank Stella, Roy Lichtenstein and Andy Warhol following in the brush strokes of Alexander Calder by leaving their artistic signature on a BMW racing car. The most recent addition to the series is the BMW M3 GT2 Art Car created by Jeff Koons.

The Concorso d’Eleganza Villa d’Este is considered one of the world’s most exclusive and tradition-steeped stages for historic cars and motorcycles. The event in the northern Italian town of Cernobbio was first held in 1929 as an exhibition for new creations from the auto industry, but since the 1980s it has majored instead on the history of motoring. In 1999 the BMW Group took over patronage of this tribute to automotive rarities, and since 2005 BMW Group Classic and the Grand Hotel Villa d’Este have acted as co-hosts. As well as classic vehicles boasting stand-out aesthetics and historical significance, the Concorso d’Eleganza Villa d’Este also presents design studies and prototypes from various eras for visitors to admire.

The Classes for Historic Cars are:

Class C – Phantom story – The Rolls-Royce Phantom through the ages

Class titles to be confirmed, may be subject to change.
Each car drives in front of the public, and the moderator will talk about some of the details relating to the car. The class winners receive an award + certificate.

The participants in the Concours d’Elegance in the categories “Historic Cars”, “Concept Cars & Prototypes” and “Motorcycles” will once again launch an eventful weekend abounding with highlights on the shores of Lake Como. Even without taking part in the beauty pageant, you can savour the magical and unique experience at first hand as a “Friend of Concorso”.

The main locations of the weekend are once more Villa d’Este and the grand exhibition space of Villa Erbe. The events in the programme reserved exclusively for the participants in the competitions “Historic Cars” and “Concept Cars & Prototypes” take place in the grounds and the rooms of Villa d’Este. As a counterpoint, the “Days of Elegance” will be held in the nearby park of Villa Erba, which will be open to the public on Saturday and Sunday.

Already on the Saturday, the Motorcycle Concours taking place there invites visitors to talk motorcycles with private collectors and the distinguished Jury, as well as indulging their joint passion for historic motorcycles in lively discussions.

The theme exhibition of 2015 is based on the headline “40 years of BMW Art Cars”. This unique project started back in 1975, when Alexander Calder took the BMW 3.0 CSL and gave it his very own personal finish. Over the years, many other artists followed suit and you can see a selection of the finest Art Cars among BMW automobiles in the evocative setting of Lake Como.

The programme of events for Saturday and Sunday will be completed with additional complementary exhibitions which are still in the process of being confirmed.

On Saturday, 23rd May 2015, the gates of Villa Erba are open to the public from 10.00 to 17.30. A range of sales stands offer accessories and snacks for visitors. At the same time, the Parade of Historic Cars takes place in Villa d’Este, reserved exclusively for invited guests.

A highlight of the weekend is provided when all the participants in the category “Historic Cars” and “Concept Cars & Prototypes” showcase their vehicles on the Public Days in the grounds of Villa Erba. The gates are already open at 09.30 and the show closes at 17.30. All the other exhibitions from Saturday also remain open to visitors on the Sunday.

The Motorcycle Concours will start at 11.00 with the prizes for the class winners and the “Best of Show” prize being awarded by the international Jury.

After the lunch break the class winners among the vehicles on four wheels will receive their awards at 14.30, together with the special prizes granted by Public Referendum. These are the “BMW Group Italia Trophy” in the category of “Historic Cars”, the “Concorso d’Eleganza Design Award” for the most exciting design, and the “BMW Group Young People’s Award” in the category “Historic Cars” awarded by visitors up to the age of 16.

Evaluation of the motorcycles by the Jury. Participants are available to talk about their motorcycles.

35 historic motorcycles from the following categories will be presented. The Motorcycle Concours will take place on Sunday 11.00 – 12.00. The following classes will be on show:

Class B – Gentlemen’s ride – The luxury of the thirties

Class C – Engine experiments in the 1950’s – Beyond the mainstream

Theme exhibition at the Congress Centre This year’s themed exhibition being held inside Villa Erba focuses on the subject of BMW Art Cars. The intriguing story of this beautiful art project is told here and brought to life with unique masterpieces from the art collection.

Sales stands with selected accessories and articles associated with classic automobiles invite you to browse and shop. These include gloves from Roeckl, menswear from Suixtil, miniature models from Brumm and BMW Motorrad accessories.

The first, second and third placed motorcycle of each class is displayed on the red carpet in front of the grandstand, facing the audience.

Medals/Awards: Each class winner will receive a Class medal. The drivers of the cars in 1st, 2nd and 3rd place will receive a certificate signed by the Head of the Jury, Carlo Perelli and Ulrich Knieps, President of the Concorso d’Eleganza Villa d’Este. The speaker will interview each owner of the class winners together with the Jury, which will take the opportunity to explain their decisions.

The Classes for Historic Cars are:

Class C – Phantom story – The Rolls-Royce Phantom through the ages

Class titles to be confirmed, may be subject to change.

Each car drives in front of the public, and the moderator will talk about some of the details relating to the car. The class winners receive an award + certificate.