The engines fire up at Campiglio 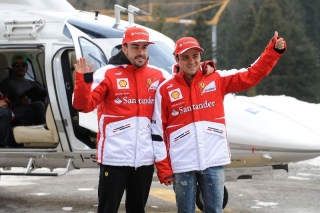 Madonna di Campiglio, 14 January – Today sees the start of “Wrooom,” the Press Ski Meeting organised by Philip Morris International. Taking place on the slopes of Madonna di Campiglio, this is the twenty third time that it marks the symbolic start of the Formula 1 and MotoGP seasons, against the magnificent backdrop of the Dolomiti mountains, in the Trentino region. As usual, the welcome dinner will take place tonight at the Salone Hofer as the international media are met by the Scuderia Ferrari race drivers along with their colleagues from the Ducati Team. For the Maranello Scuderia the first meeting with the specialist press will take place on Wednesday, as the team principal Stefano Domenicali takes to the stage at the conference centre for a press conference, while on Thursday it will be the turn of Fernando Alonso and Felipe Massa. The Brazilian has taken part in this event countless times, while it will be Alonso’s fourth appearance and joining them will be Marc Gené, the Spaniard who works on marketing and sporting activities linked to Prancing Horse customers. Then, on Friday, the Ferrari men will be joined by their two-wheeled colleagues for the kart race on the frozen lake, which provides the setting for the spectacular closing ceremony of this week of sporting activity. 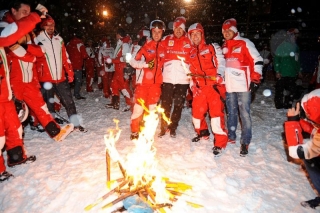 Madonna di Campiglio, 15 January –Tuesday at Wrooom will come to an end under the lights of a spectacular torchlight procession. The Philip Morris International Press Ski Meeting got underway yesterday on the slopes of Madonna di Campiglio, with the Scuderia Ferrari drivers and their Ducati Team colleagues meeting up with the specialist media for the twenty third edition of this event, regarded as a curtain raiser to both the Formula 1 and MotoGP seasons. Also at tonight’s dinner in a typical mountain chalet is Stefano Domenicali, who arrived here late in the afternoon, on a day when Felipe Massa had a busy day skiing, while team-mate Fernando Alonso worked on his training in the gym. Both drivers have a fleet of brightly painted Fiat Freemont cars to shuttle between the glamorous and elegant Chalet Fiat, at an altitude of two thousand metres and the main area of the event. In fact, it was from Fiat’s “winter home” that the Fiat Top Ski Schools Project got underway last December, when the Freemont was again in action, alongside 640 experts from 14 of the top Italian ski schools. Tomorrow, the Scuderia Ferrari drivers will enjoy another day relaxing in the mountains, while team principal Domenicali will be on call for one of the many press conferences, which today got underway with the riders from the two-wheeled team. 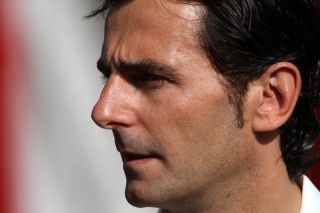 Madonna di Campiglio, 16 January – There’s a new driver joining the Ferrari family. As from this year, Pedro Martinez De La Rosa will be on the Scuderia’s books for technical, racing and commercial activities. The Spanish driver, born in Cardedeu on 24 February 1971, has taken part in 106 Grands Prix, racing for five different teams (Arrows, Jaguar, McLaren, Sauber and HRT,) with his best result being a second place in the 2006 Hungarian Grand Prix. He has scored a total of 35 championship points. “We decided to add De La Rosa to our group of drivers mainly to strengthen one area, namely work in the simulator, which with the current regulations regarding testing, is becoming ever more important,” said Team Principal, Stefano Domenicali. “Pedro therefore joins a group of drivers that already includes Davide Rigon, Marc Gene, Andrea Bertolini and Jules Bianchi. Regarding the latter, who is also part of the FDA, we are currently trying to find him a role in Formula 1 and when we have some news, we will let you know.”
“It is amazingly motivating to be working for a team like Ferrari, not just because of what it represents in the history of Formula 1 and motoring in general, but also because it will be a completely new and very stimulating experience for me,” said De La Rosa. “I really hope I can get to work as soon as possible and to help in the development of the car. I am happy to be collaborating with Fernando again and also to be working with Felipe. There’s not much time until Australia, but there is a lot to do and I am available to help the team from right now.” 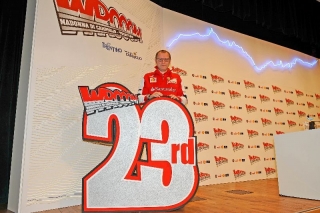 Madonna di Campiglio, 16 January – February 1st has been set as the date for the presentation of the car that will take part in the 2013 Formula 1 World Championship. Scuderia Ferrari’s team principal, Stefano Domenicali announced the news to the media at the Wrooom event, during his press conference held this morning at the Conference Centre in Madonna di Campiglio, the magnificent setting for the Press Ski Meeting, organised by Philip Morris International. There are just 15 days to go until the launch at Maranello; just one of the topics on the agenda for Domenicali who arrived here yesterday to take part in this event that has provided the symbolic kick-off to the racing season every year since 1989.

Domenicali: “We have a clear aim, to win” 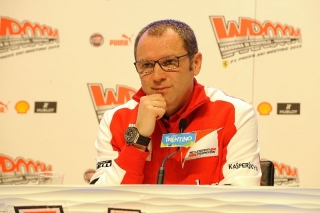 Madonna di Campiglio, 16 January –2013 will hold plenty of challenges for Scuderia Ferrari and will be an important year in terms of tackling the significant changes to the Formula 1 regulations that will come into effect in 2014. A transition year therefore? Absolutely not. Before Christmas, Team Principal Stefano Domenicali announced a reorganisation of various areas within the Scuderia, which had begun halfway through 2011, with the aim of ensuring the best possible balance between the design and development of the 2013 and 2014 cars. This involved two separate working groups to operate as effectively as possible on both the immediate and longer term future. The new approach has naturally attracted interest from the media, who attended today’s traditional press conference with which Domenicali officially got this new Ferrari season underway. “The 2013 season will be a complex one from many points of view,” said Domenicali. “We face a few changes on the technical front which will have a significant impact on all areas of the company, not just in terms of design, but also when it comes to the investment and infrastructure required to develop the new engine. Within the limits imposed by the regulations, we need to put every effort into reaching our objectives, while making the best use of the timescale in preparing for 2014. Our aim is clear, to win and the priority is still that of giving our drivers a car that will be competitive right from the very start. The development of the 2013 car began in the Cologne wind tunnel and is on-going. I certainly expect to see greater efficiency than last year because we will no longer need to carry out comparisons of data and correlation with the Maranello wind tunnel, which is currently being rebuilt and is due to be operational again after the summer break.” 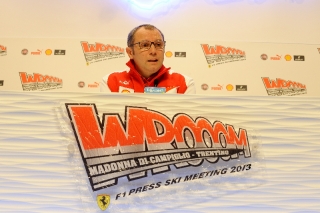 Madonna di Campiglio, 16 January –“Wrooom!” The Scuderia Ferrari race season got underway officially today with a Stefano Domenicali press conference. The meeting with media from across the globe, held in the Dolomite mountains, saw the Maranello Team Principal undergo a cross-examination featuring all the classic pre-season themes. Naturally, these included how things were looking for the two drivers, Felipe Massa and Fernando Alonso and what was motivating them right now.

“I think the toughest part of Felipe’s career is now behind him,” said Domenicali. “After last summer, his approach turned about and as a result, his performance on track changed and he managed to show just how talented he is. I’m sure his problem was not linked to his contractual situation. Personally, there was a lot of pressure on me regarding possible changes, but in the interests of the team, I preferred to wait and today, I’m convinced that keeping Felipe in the Ferrari family was the right decision. His performance in the second half of the season contributed significantly to our second place in the Constructors’ classification: for the team that is a strong point and for Fernando, it provides further impetus to try even harder.”

“Fernando had an amazing season,” continued Domenicali – “and we’ve been saying that for three years now, while he continues to astonish everyone. His strength as a champion and his great fighting spirit is a guarantee for himself and for the team: our responsibility is to give him a car with which he can make the most of his abilities and his killer instinct. Could Vettel and Alonso one day be part of a dream team? I think our President has already commented on this subject several times: a dream team is fantastic if it is correctly managed, but at the moment we are not looking at that, because we want to ensure the team is as well balanced as possible. You have to be very careful, not just in Formula 1, but in sport in general, because sometimes, putting together all the Number Ones can lead to more negatives than positives.

”Finally, in answer to questions relating to criticism aimed at Alonso in recent weeks, Domenicali had this to say: “As usual, there are people who try and stir up the politics, believing they will provoke a reaction, but I am deaf to these things and I believe Fernando is totally focused on his performance, while I can assure you that the team will give its answer on the track, with deeds not words.”