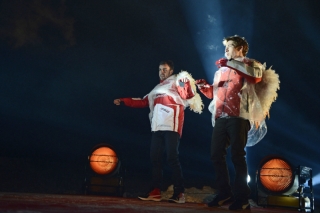 Madonna di Campiglio, 18 January – The evening spent in the Chalet Fiat at Madonna di Campiglio last night will be hard to forget and was one of the more spectacular moments of this Wrooom week. Fernando Alonso and Ducati’s Nicky Hayden put on an impromptu show with some help from Brasil, one of Felipe Massa’s friends from Sao Paolo, featuring feathered wings and special effects in a short but exhilarating performance. Today is the final day of this Philip Morris International Press Ski Meeting and will feature a ski race and later a kart race on the frozen lake between the Scuderia Ferrari drivers and Ducati Team riders. 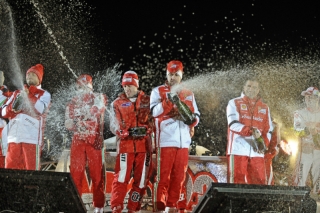 Madonna di Campiglio, 18 January – The sky lit up with fireworks to salute the double win for Fernando Alonso on the ice lake at Campiglio at the end of a go-kart race between the Scuderia Ferrari drivers and the Ducati Team riders. The event also featured the appearance of a Ferrari FF in the role of Safety Car. Starting alongside his team-mate Felipe Massa, Alonso soon found himself at the back of the pack after a spin, but he fought his way up through the field to take the win in the first leg. He won the second leg too, in a race where the grid was based on the reverse order of the previous race result. It took the Spaniard just a handful of laps to work his way up into the lead, thus finishing first overall, ahead of Massa and Giancarlo Fisichella.

Earlier in the day, the Ferrari men took part in the traditional ski race, where winner in the drivers’ category was Giancarlo Fisichella who finished ahead of Felipe and Dudu Massa. The curtain came down on another unforgettable Wrooom event with a farewell party.