A Ferrari rises from the ashes 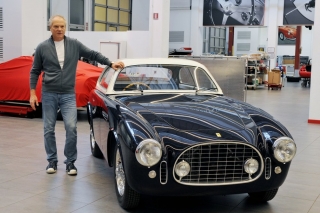 Maranello, 15 March 2016 – After almost two years of work, restoration of the 225E chassis no. 0178 is finally complete and the car is back in its owner’s hands. The project was a huge challenge for the Ferrari Classiche department as the car, which belongs to an Argentinean collector, arrived in Maranello in a terrible state of repair, having been partly-destroyed in a fire.

Racing past. The 225E left the factory in May 1952 and was first owned by Count Antonio Sterzi. It quickly made its competitive debut in none other than the Mille Miglia in the hands of that gentleman and his co-driver Nino Rovelli. In June the same year, the 225E won the Coppa della Toscana with Bruno Sterzi who also raced it to victory in the Bolzano-Mendola hillclimb and the Coppa InterEuropa at Monza for which both front and rear bumpers were removed. The car changed hands a couple of times but was then involved in a fire in which it sustained severe damage. The engine, however, was almost entirely salvageable and an attempt was made during the 1980s to restore the bodywork. Unfortunately, however, the 225E remained undriveable.

New lease of life. The 225E’s renaissance came about thanks to its new owner who commissioned Ferrari Classiche to do the reconstruction of the interior and a full restoration of the car. Because the documentation regarding the original interior had been lost, the Maranello team decided to examine all the Ferraris of this kind built in the early 1950s to ensure the new interior’s spec would be as faithful as possible. The engine too was fully reconditioned and just a few days ago, sporting a two-tone white and blue livery, the 225E finally returned to ruling the roads.