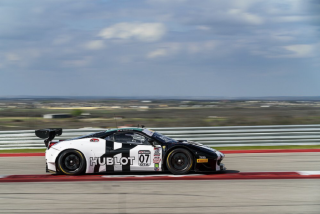 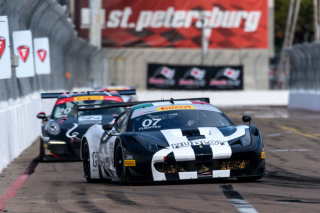 Class master. Entering the weekend as the GT-A-class championship leader on the strength of two victories at the season-opening event at Circuit of The Americas, Fuentes drove the Ferrari 458 Italia to victory in the third Pirelli World Challenge round held Saturday morning as well as the fourth on Sunday afternoon. The two victories marked the latest successes for Ferrari in the Pirelli World Challenge, as the Ferrari 458 Italia has now scored 11 victories in the championship.

66 point lead. Fuentes started the weekend by qualifying on pole position in GT-A for Saturday’s race. The 50-minute race was run without caution periods, enabling Fuentes to establish a large lead as he led the race from start to finish. Sunday’s race was dramatically different, with two caution periods causing limited green flag racing and not allowing Fuentes to establish a lead. Withstanding the challenge of multiple restarts, he was able to keep the Ferrari in front of GT-A to score his fourth victory in four races. Both St. Petersburg overall races were won by Michael Lewis con the Effort Racing Porsche. Fuentes now enjoys a 66 point lead in the GT-A championship. The next race for the Pirelli World Challenge will be April 15-17 at the Grand Prix of Long Beach.

St. Petersburg, 11 March 2016 – Martin Fuentes and Scuderia Corsa scored two victories in two races when the Pirelli World Challenge started its season last weekend at the Circuit of The Americas in Austin, Texas in the no. 07 Ferrari 458 Italia. This weekend, he will look to keep that winning streak alive as the series goes to its second event of the year at the Grand Prix of St. Petersburg, first race of the IndyCar series.

In great shape. Fuentes dominated the GT-A class in the first two rounds of Pirelli World Challenge at the Circuit of The Americas in Austin, Texas just a week ago. After taking pole position for the first race, he led GT-A from start to finish. The second race brought an even stronger performance, as he took GT-A honors again from pole position and finished an incredibly strong sixth place overall. Fuentes has started the season with a strong lead in the GT-A championship.

Tha track. Fuentes and Scuderia Corsa will again be the lone Ferrari representative in the field of 24 GT-class cars. Unlike the purpose-built Circuit of The Americas circuit, the St. Petersburg course is a temporary circuit made up of city streets and the airport runways of Albert Whitted Airport. The picturesque and challenging 1.8-mile, 14-turn circuit is located on the waterfront of St. Petersburg.